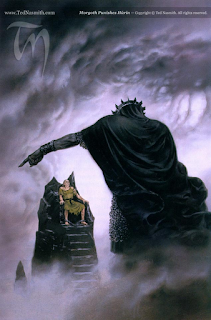 ''Fair as an Elf-child is Lalaith,'' said Húrin to Morwen; ''but briefer, alas! And so fairer, maybe, or dearer.'' And Túrin hearing these words pondered them, but could not understand them. For he had seen no Elf-children. None of the Eldar at that time dwelt in his father's lands, and once only had he seen them, when King Fingon and many of his lords had ridden through Dor-lómin and passed over the bridge of Nen Lalaith, glittering in silver and white.

But before the year was out the truth of his father's words were shewn; for the Evil Breath came to Dor-lómin, and Túrin took sick, and lay long in a fever and dark dream. And when he was healed, for such was his fate and the strength of life that was in him, he asked for Lalaith. But his nurse answered: ''Speak no more of Lalaith, son of Húrin; but of Urwen you must ask tidings of your mother.''

And when Morwen came to him, Túrin said to her: ''I am no longer sick, and I wish to see Urwen; but why must I not say Lalaith any more?''

''Because Urwen is dead, and laughter is stilled in this house,'' she answered. ''But you live, son of Morwen; and so does the Enemy who has done this to us.''

She did not seek to comfort him any more than herself; for she met her grief in silence and coldness of heart. But Húrin mourned openly, and he took up his harp and would make a song of lamentation; but he could not, and he broke his harp, and going out he lifted up his hand towards the North, crying: ''Marrer of Middle-earth, would that I might see you face to face, and mar you as my lord Fingolfin did!''

But Túrin wept bitterly at night alone, though to Morwen he never again spoke the name of his sister.
(J.R.R Tolkien, The Children of Húrin, chapter I).

Art: Ted Nasmith. It depicts Morgoth cursing Húrin and his kindred - as the Diabolos, ''master of the fates of Arda,'' as he described himself, the curse of Morgoth was unlike a ''curse'' in the commonly understood sense. Morgoth, as the origin of evil, is not invoking a higher (or lower, as the case may be) power, but intends to bring about the destruction of Húrin by the force of his own gigantic will, by ''designing'' the future of Húrin, mapping out his life, and making him look upon it, unable to hinder it. Of course, this actually took place after the events described, and Húrin got his wish, and saw the Dark Lord face to face. Maybe it was one of those things where we ought to beware of wishing for our heart's true desire, lest we end by getting it?
Posted by Patrick Sheridan at 10:29 pm No comments:
Email ThisBlogThis!Share to TwitterShare to FacebookShare to Pinterest
Newer Posts Older Posts Home
Subscribe to: Posts (Atom)