The papal fanon has returned, sing joyfully unto God! I first saw the fanon in a biography of John Paul II by Lord Longford many years ago and thought it a rather ugly thing, and I guess it's one of those things where I really can't understand the enthusiasm for its return; although the photograph was taken somewhere like Phoenix Park or Knock (I think it was in Ireland), and the general hideousness of John Paul II's attire may have formed my view of the fanon; who cares? I certainly don't care for modern papal liturgy. This ''Rome is home'' mentality, the pope is a Mr Fix-it (who can't fix it) idea are sentiments foreign to my nature. The pope was the peasant who dropped the stone in the mountains...I know, we'll all look to the pope a century later to try and sort it all out. Never mind that the pope publically celebrates Mass facing the wrong way...oh what's the bloody point in carrying on? Why bother repeating myself? Just take this as a proverbial raspberry and two fingers up.
Posted by Patrick Sheridan at 6:48 pm 5 comments:
Email ThisBlogThis!Share to TwitterShare to FacebookShare to Pinterest 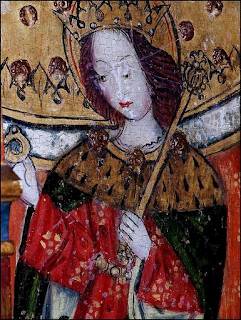 I am not dead, though I am not at all well at the moment. I decided against going on pilgrimage to the Shrine of St Edward the Confessor as I didn't feel up to being so far from home by myself, though I have made intercession unto him for counsel and help in my travail. St Edward was a paragon of kingship and piety; no wonder no Roman Catholic 'blog (to my knowledge) has made mention of him! I cannot say that I have been reading any 'blogs of late, though, or indeed any literature of any description. So, what have I been up to recently, you ask? Nothing; just work and sleep.

The image at the top of this post is a 15th century rendering of St Edward from the rood screen in the church of Sts Peter and Paul in Eye, Suffolk. It was restored by Sir Ninian Comper, I believe.

This scene from the Bayeux Tapestry depicts not St Edward but Harold Godwinson at his coronation. Note that the Archbishop Stigand wears something strikingly akin to the Russian Orthodox felon; something else which supports the much-maligned fact that the Saxon Church was Orthodox, not Roman. It was under William the Bastard, marching under the papal banner, that Roman Catholicism was brought to these shores. 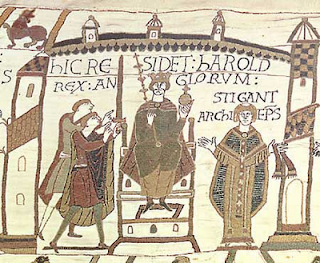 St Edward the Confessor, pray for us; fortify Her Majesty and all the Royal Family in righteousness and fear of the Lord, and keep the illustrious church of St Peter at Westminster in the faith of our fathers. You may like to read posts I wrote in 2010 and 2011. I cannot presently add to them.
Posted by Patrick Sheridan at 5:12 pm 3 comments:
Email ThisBlogThis!Share to TwitterShare to FacebookShare to Pinterest
Newer Posts Older Posts Home
Subscribe to: Posts (Atom)