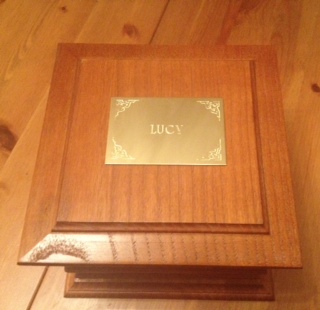 It is with abundance of grief that I tell you that Lucy has gone to her long home. I began this post on 3rd November, the day after, but, for want of words to say, couldn't do a wretched thing. It is not quite the same but I felt as Húrin did when, upon the death of Urwen, he took up his harp and would make a song of lamentation but couldn't, so he broke it instead.

It is strange to think that it was only five months ago that she wandered off on her own little adventure and that when she was found everyone loved her for her good nature and thought she was younger than her years. It was so different in her last days. My mother and I had noticed a swelling in her abdomen and so my father and I took her to the veterinary practice where, after an ultrasound scan, the vet gave her a very grim prognosis indeed: one week maximum. We took her home and she just collapsed by the living room door. Having given up my previous dead-end job after 8 long, dark years and taken up very disagreeable shifts with a better retailer (having no other opportunity to run errands) I felt compelled to leave her to buy some new work shirts and was out of the house for about three hours. Upon my return I was told that she hadn't moved from her position all the time that I was gone. The next day I watched and waited anxiously. On Tuesday my mother came home from work and told me that she would have to call the vets as she could not stand to watch Lucy deteriorate so rapidly. She became very weak and disinclined, and often shook in a pain that was grievous to see (though I daresay she tried her utmost to conceal it from us). On Wednesday morning I made the appointment myself. Curiously, it was Lucy's birthday on Thursday and we all made a fuss of her and gave her her favourite, lamb's liver and, though she didn't eat much, she did manage to climb into her favourite spot when we had all retired: my father's armchair. Friday came and I went to work and checked as often as I was able on her condition, which remained poor. I came home late and she had apparently not moved from her blanket (moved into the living room) all day and had refused all food and water. By now her stomach was so swollen that she even found lying down painful and would try to get up only to fall down again. At about 11 o'clock it got too much for me and I called the PDSA. They were going to charge me a £200 out-of-hours consultation fee and I was about to forego all pride for my dog's sake when, mercifully, she settled down to sleep. After everyone else had gone to bed I poured myself a large whisky and sat down with my friend for the last time.

On Saturday morning it was clear that Lucy hadn't slept much (or at all) that night, and hadn't even the strength to climb into her favourite, forbidden spot. After a pot of strong tea, my mother, my father and I wrapped Lucy in an old beach towel and carried her to the car. We took her to the veterinary practice again and laid her down in the waiting area while the nurse got everything ready. A few moments later we were beckoned in by the vet and Lucy was taken in and laid on the table. My mother couldn't stay in the room and, after promising to take Lucy to Foots Cray Meadows (Lucy had been very fond of the river), left my father and me in the consulting room with the vet and the nurse. My father signed the consent form and the vet shaved Lucy's paw as the nurse upheld the dog's head. The injection was then administered by the vet. After about a minute the nurse laid down Lucy's head on the table and left the room, followed thereafter by the vet. Lucy's eyes were still open and seemed fathomless and very knowing, though she was at last dead. I tried to close them and waited for a moment with my father by the poor creature. Conscious of the time (yes, I know how awful that sounds) I then kissed her head and went to pay the fee. It wasn't to my liking but we had opted to have Lucy cremated. The fear of urban foxes digging up her mortal remains was ever on my father's mind and so burial was out of the question, even if it would have been funny to have her buried on the spot where, as a puppy, she had dug a hole that was so big that the neighbour's shed had started to collapse!

Lucy was my friend. I don't think that there could ever have been a purer soul in this selfish world and I thank God for her life; she was, verily, His greatest gift. 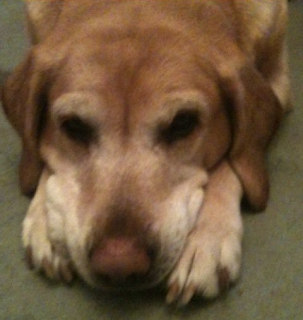 Sacred to the Memory of
Lucy
2001-2013
Posted by Patrick Sheridan at 8:00 am 3 comments:
Email ThisBlogThis!Share to TwitterShare to FacebookShare to Pinterest
Newer Posts Older Posts Home
Subscribe to: Posts (Atom)