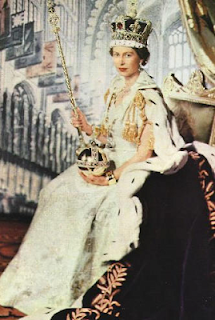 I say this with unrepentant royalism: Her Majesty The Queen represents our very last national Christian institution and I think she's wonderful. In the words of my mother, she ''has been an absolute blessing to this Nation and Commonwealth;'' indeed I can think of no other who has served this nation so selflessly and devotedly for so many years. Other countries had revolutions and wars scarce less than our own but we've managed to stay politically sound in spite of so much Whiggery and suspicion of the Jesuit lurking in the shadows with a dagger. I guess this is one reason Oak Apple Day always appealed to me. We had a godly Restoration of our Church and Government because the commons of the Realm found the alternative repugnant, that being ruthless tyranny, ugliness and the Protestant religion.

Of course, the Coronation of Queen Elizabeth II was, in all likelihood, the very last Catholic Coronation in the history of civilisation. When The Queen eventually passes to her reward (may that day be long from now) her successor, whoever he is, will inherit a very different Kingdom and Commonwealth. His Coronation will be cut short, it will be some awful ecumenical, inter-religious affair; hardly worth watching. Indeed, the Coronation, while having no real legal standing, goes to the heart of the mystery of government; that being that the Sovereign is directly anointed by God to defend the Church, do justice and to suppress evil laws and customs. What could be more odious to modern, secular society? What better way to pave the way for the destruction of Monarchy than by sabotaging the rite of Coronation? In no particular order (I am not a prophet) everything old and good about national life will go, and in my lifetime. The Church of England will eventually be disestablished, the House of Lords will go to be replaced with a different, secular kind of ''upper house,'' the Commonwealth will disintegrate (Australia will be the first, I think), the Monarchy itself, representing the last connexion between these evil days and the godly days of yore, all the old livery companies, etc. It is an inevitable process but no less regrettable.

Through my depressive months I came to the realisation that you can't change the world, even in a lifetime, and so for the preservation of your sanity you just have to accept the world as it is, as unfair, iniquitous, jealous, despicable and as depraved as it really is. By waving Bibles around and whinging about it you just end up making yourself very unhappy. Be true to yourself, and to the Truth, but remember that you live in a world of relativism. After all Historia is a long defeat and salvation comes only through Christ.

I have digressed, and this has turned into a rather dismal post which was not my intention. What I mean to say is: enjoy The Queen while she is here. Long live The Queen! Vivat Regina!
Posted by Patrick Sheridan at 2:50 pm
Email ThisBlogThis!Share to TwitterShare to FacebookShare to Pinterest