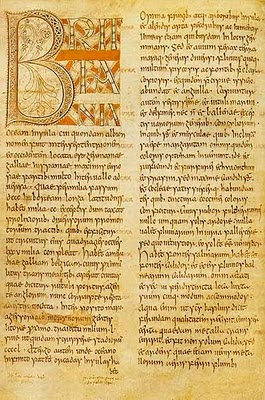 I tend to think that if you proposed to J.R.R Tolkien the prospect of doing away with the Old Roman Rite in English parish churches and to replace it with the Use of old Sarum, he'd have dismissed the idea as too French! I think I would too, although I think that in the mid-19th century the newly restored hierarchy should have given more serious thought to the question. Afterall, the catholicity of the Church does not necessarily entail uniformity of the Latin Rite. Of course, Tolkien's objection to the Sarum Use would be that it does not pre-date the Norman Conquest, and so like replacing Saxon eorls with Norman knights such a prospect would be just as aggressive an affront to the Englishness of the Church as imposing an ''official'' foreign language upon Parliament, which was incidentally Norman French for the next three hundred years. That is not to say, however, that there were not Gallican influences on the Church in Anglo-Saxon England.
If you read St Bede's Ecclesiastical History, as Tolkien will have done (the only references to St Bede that I am aware of in Tolkien's published work is in his very interesting essay English and Welsh), you will notice some peculiarities in English ecclesiastical life. The general thrust of this great work seems to me to be the conflict between Roman and Celtic Christianity. Ridiculous though it may seem for one so ignorant of this period in Church history to venture any kind of analysis, I venture to utter a few thoughts nonetheless, for it is very interesting. Turning to my translation of Cuthbert's Letter on the Death of Bede, for instance, we read: A tertia autem hora ambulavimus cum reliquiis sanctorum, ut consuetudo illius diei poscebat; ''From the third hour, however, we walked [in procession] with the relics of the Saints, as the custom of that day required.'' Since this refers to the Feria Quarta preceeding Ascension Day it is an obvious early reference to the English custom of observing the Rogations processions. 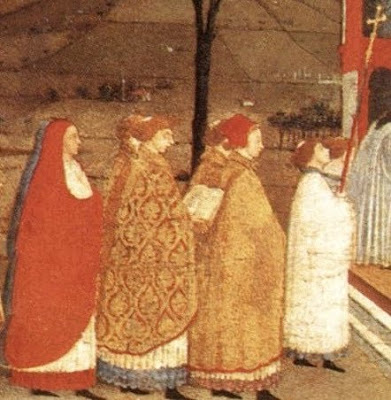 Another small, though perhaps noteworthy, reference to English liturgical life is St Bede's small treasure trove. St Bede says: Quaedam preciosa in mea capsella habeo, id est piperum, oraria et incensa; ''I have certain precious things in my small box, that is, pepper, napkins and some incense.'' Pepper and Incense go without saying; both were highly valuable at the time, having to be traded via the Indian Ocean, the eastern Mediterranean and Arabia. However it is oraria, an unhelpful neuter plural noun, which is interesting. Orarium means napkin or handkerchief, but the sense employed by St Bede here seems to mean, according to the footnote in my Latin edition, ''small cloths or veils used in the performance of the liturgy.'' There is no elaboration, and the Lewis & Short doesn't pick this sense up, so does anyone have any suggestion as to how these small cloths or veils were used?
In the days of St Bede there would have been a much greater scope for local custom and tradition in the liturgical life of the country. In Book I of the Ecclesiastical History St Bede relates a correspondence between St Augustine and St Gregory, the Pope of Rome, in which Augustine asks: ''Even though the faith is one are there varying customs in the churches? and is there one form of Mass in the Holy Roman Church and another in the Gaulish churches?'' To which the Pope replies:
''My brother, you know the customs of the Roman Church in which, of course, you were brought up. But it is my wish that if you have found any customs in the Roman or the Gaulish church or any other church which may be more pleasing to Almighty God, you should make a careful selection of them and sedulously teach the Church of the English, which is still new in the faith, what you have been able to gather from other churches. For things are not to be loved for the sake of a place, but places are to be loved for the sake of their good things. Therefore choose from every individual Church whatever things are devout, religious and right. And when you have collected these as it were into one bundle, see that the minds of the English grow accustomed to it.'' [My own emphasis].
These are very apposite points. One might ask, is using the liturgical formulae of Rome to the finest point, when geographically isolated from Rome, necessarily a good thing? The Augustinian missions to this Isle brought with them not only the Faith but a return of things distinctly Roman, and the old Britons (at least the remnant of the Romano-British, the likes of St Patrick) would have welcomed this. I suppose this is all largely tied up with the fact that the only Patriarchal See in the West is Rome, and so missions all set out from there (the Irish missions to this Isle, and even to the Continent as far as Switzerland, are an isolated case - and Ireland, like England, has no apostolic See. As I have said, a large part of St Bede is devoted to the conflict between the Celtic church and the Roman church). Speaking as a reader in the Classical world and living amongst heathens (I work in a supermarket, you see, and most of them do not even come up to the standard of pagans in their apostasy) I would certainly welcome the return of the Latin tongue to these shores, as a living thing, a connexion between antiquity and remoteness, civilisation etc. But ought not the Church to take stock of St Bede, nay even of Pope Gregory's counsel, that things are not to be loved for the sake of places but rather that places are to be loved for the sake of their good things? I think that a good cultivation of a varied rather than a uniform liturgical life would enkindle the Liturgy of this Isle. One wonders how St Bede would view the modern state of Catholicism (of the ''traditionalist'' kind) in this Isle. Would he recognise it?
Posted by Patrick Sheridan at 12:53 pm
Email ThisBlogThis!Share to TwitterShare to FacebookShare to Pinterest