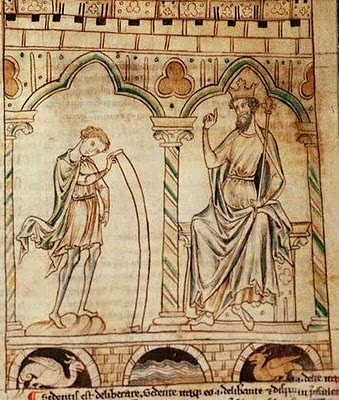 I am currently reading the Historia Brittonum (the Vita Patricii), an ''historical'' work commonly attributed to Nennius, a Welsh monk of the 9th century. Unlike St Bede, the father of English history, who was very meticulous, Nennius has a tendency to be ''inventive'' and according to modern historians a lot of his sources are fictitious, although personally I think that most were simply lost. I was referred to the Historia for translation purposes last year by an old friend from University now studying Celtic Christianity. The Latin is not as hard as St Bede (about whom I shall post something tomorrow...in spite of the great Octave) but still worthy and is easy enough that I can translate relatively fluently without too much recourse to the Lewis & Short. I am relying, however, on The Latin Library. I think it a great nuisance that Latin books are so rare. How on earth can you understand the author and the age if you're reading his work in a foreign language?
The above image depicts Merlin reading his Prophecies to Vortigern, in a manuscript of Geoffrey of Monmouth's Prophetiae Merlini, c.1250. A lot of the Arthurian stuff, of course, is derived from the Historia Brittonum.
Posted by Patrick Sheridan at 1:53 pm
Email ThisBlogThis!Share to TwitterShare to FacebookShare to Pinterest