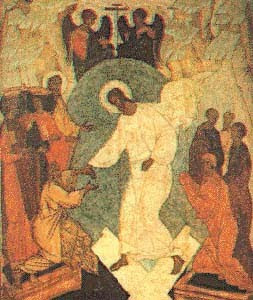 I wish you all a very happy Easter! I am just back from assisting at a quiet Triduum in the back of beyond - all according to the rites of the Church as they were before 1956, and at the correct times. I went up with a friend on Wednesday evening and came back today after Mass of the Lord's Resurrection. We tried to do as much as we could as resources and only four people (including Celebrant) would allow. On Maundy Thursday we chanted None before Mass of the Lord's Supper (at 9:00am...yes that's right - in the morning!), essentially a ''low'' Mass with two servers (MC and thurifer), incense and the Proper prayers and Ordinary sung, either according to the plainsong melodies in the Gradual or monotoned where this was impractical. No Mandatum of course (for practical reasons, and even if we had thirteen poor men none of us would be so impertinent as to insert the Mandatum into the rite of the Mass, as only an aliturgical Modernist with no intelligence would). Afterwards we watched at the Altar of Repose and then went to break our fast with Thai food (whilst poor Traddies were still fasting I expect! Oh no wait, Pius XII did away with the Midnight Eucharistic fast to better accomodate the aberration that is evening Mass!) At 5:00pm we chanted Tenebrae of Good Friday, using the pre-Peasant psalmody and we did not, unlike so-called ''traditionalists,'' omit the Miserere. We did not have a hearse (or even candelabrae) and so it was my counsel that we use a table, veiled in violet, and use fourteen tea lights and a central candlestick. Not ideal but we only had enough unbleached candles for the High Altar and certainly not enough ordinary candles or candlesticks to go around. I'm sure the Almighty thought more of our effort at liturgical orthodoxy than anything aesthetically ''impressive'' provided by most churches and cathedrals though. 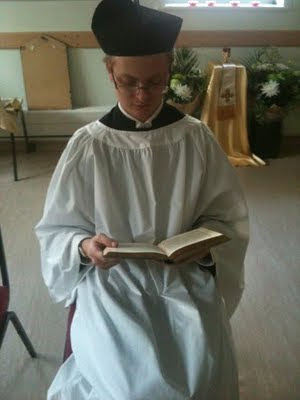 Yours truly vested in cassock, surplice and biretta about to chant Tenebrae of Good Friday. Some people accuse me of ''extremism'' for ranting about the surplice and evening Mass - the way I see it, I simply go to church expecting the real thing and, well, if nobody else gets it right you have to do it yourself.

Good Friday morning came (if I'm honest, I hate Good Friday) and we made our way to the church. Our Celebrant was late, due to public transport, and so we had not the time to chant None as we had planned and so just got on with the Mass of the Pre-Hallowed Gifts. My plan for the Passion according to St John was to be Chronista (although I must confess I only know the Mattins tone for the post-Peasant version - something to work on for next year) let the Celebrant do Christus and the others to provide the Synagoga/Turba parts but it was the desire of the Celebrant to simply read the Passion at the Epistle corner, as per the directions of the Memoriale Rituum - although the latter part, beginning at Post haec autem rogavit, was chanted according to the ancient tone, ironically restored (I think) by Pius X. Again, ''low'' ceremonial, with two servers, but sung for the most part (by us and the Celebrant), and with incense where it was required. Nobody communicated of course. I had thought of composing a long tract of maledictions or anathemas against '62ists and have the Celebrant interpolate these into the Litanical Prayers, but I had not the time - perhaps next year. Dry toast and water was my plan for Good Friday although we were constrained to march in procession with a host of other Protestants in some sort of ''act of witness,'' and feign interest in their religion afterwards over tea and hot cross buns, scraped over with some sort of ''spread.'' One of the lady ministers present (priest-women send shivers down my spine - they're like nuns in a way, only much worse), from a Protestant sect, looked like a man from afar, though I was wearing my old prescription sunglasses and only realised my mistake when she came to speak with us. I was told in advance to keep my mouth shut and was pretty successful I reckon, though apparently I was seen giving some priest-woman a sideways look. I would say that my contribution to the ecumenical movement was my having been present at all though. As a general rule I do not pray with Protestants (and I'm thinking of extending this rule to RC traditionalists).

At 3:00pm, as Traddieland began their nonsensical and untraditional ''solemn liturgical action,'' we returned to the church to pray the Stations of the Cross, according to the form of St Alphonsus. We sang a verse of the Stabat Mater (in Latin) between each station (my idea) and chanted Tenebrae of Holy Saturday afterwards (wonderfully, or woefully, short). 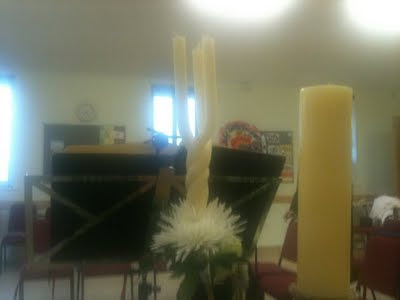 Holy Saturday morning came, warm and with omens of joy. Holy Saturday is the hardest of the three days, but the most interesting of the Triduum; one of only two ''penitential'' days left in the liturgical year where the Mass begins with a Litany, as many did of old. Pictured here is the Reed, adorned with flowers from the Altar of Repose. We were fortunate to be joined on this day by a man who was wont to go to Durham years ago for Dr Glover's Triduum, and so we had the beautiful Tracts of the twelve (not four, as in the appalling '62 rite) Prophecies sung according to the melodies of the Gradual rather than monotoned - I can read plainsong notation, but not very well. We had no font (again, resources...) and so we went straight into the Litany and the first Mass of Easter. It is unspeakably moving to hear the Great Alleluia for the first time in weeks; it reminds me in a strange way of Túrin's silence after the death of Beleg and how his tears were loosed after partaking of the waters of Eithel Ivrin, hallowed by Ulmo in ancient days. After Vespers we went to break our fast and drink lots of wine and gin (I had pink gin, the most civilised of all drinks in my humble opinion). We had planned on chanting Paschal Mattins and Lauds but we were too tired in the end - the Triduum is that much harder with scanty resources and a serious lack of people and so I think we can hardly be blamed. My friend and I recited it when we got in after lunch anyway.

Easter Sunday is upon us and below is the High Altar vested for the greatest of all feasts. The Celebrant intoned and I sang the Vidi Aquam before Mass - again ''low'' in ceremonial (well not really, we didn't really do much kneeling - at any rate kneeling is inappropriate during Paschaltide and on Sundays) but with incense and the proper prayers chanted from the Gradual. After Mass we sang the seasonal Marian anthem and joined the Protestants again for coffee, tea and cakes. 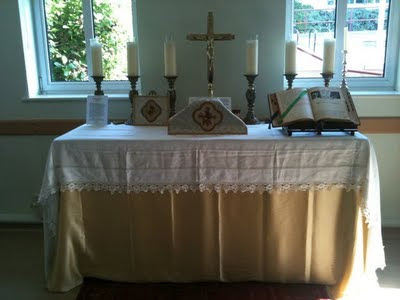 I am very tired now, though I can go to bed tonight safe in the knowledge that what our small church did was right and proper and the rest of the Roman Church (which we anathematize) was wrong - in the Novus Ordo, liturgical books of 1962 and even among the more ''sensible'' ones who tried to get it right by doing ''old'' Holy Week but at the incorrect times - thereby rendering their efforts void of all Grace and propriety. What we did was ''low'' (we can probably manage High Mass next year), due to circumstances, but we sang the lessons, prophecies, tracts, psalms etc and made use of incense - in a sense trying to make the Liturgy as much like it should be done as we possibly could within our means with two servers, a Celebrant and priest in choro. Now I am off to drink more gin and enjoy my Easter supper - I believe I have earned it.
Posted by Patrick Sheridan at 4:05 pm
Email ThisBlogThis!Share to TwitterShare to FacebookShare to Pinterest