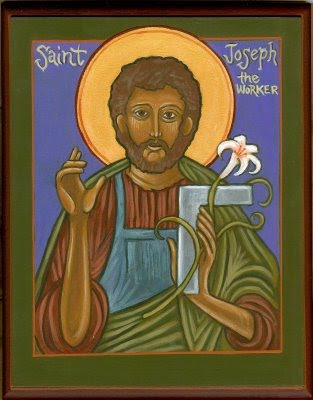 Today, in England, is the festival of St George, our (novel) patron. To be honest I'm not enthusiastic about foreign saints, particularly if they supersede an old English one. St Edward the Confessor is the true (and traditional) patron saint of this country, and the Royal Family, and his feast day is not until October. Therefore I am celebrating the traditional feast of the holy Apostles Philip and James instead. For an erudite account of what happened to this feast in 1956, see here.

And now we come to a matter which touches me very near. You see one of the reasons I started blogging again is because the nasty little Traddie elite in one of many so-called ''traditionalist'' parishes, this time last year, decided (against my counsel) not to celebrate the traditional feast of Sts Philip and James on its proper day (as indicated in the St Lawrence Press Ordo) but the novel pseudo-feast of ''St Joseph the Worker,'' or aptly named in Italian San Giuseppe Comunista, invented by pope Pacelli in the 1950s (the golden age of Trad Catholicism) in deference to communism, because, I was told, ''the people have a devotion to St Joseph.'' Oh it was awful. Expecting Miranda and I was greeted by Caliban! I turned up to serve the first Saturday of the month Sung Mass, expecting red vestments and a decent Sung Mass in honour of the holy Apostles whose feast has been on this day since the first Millennium (and is even so in the Book of Common Prayer kalendar of saints), and the Traddies decided to put on a farce of Ultramontane crap. I only stayed because it was the First Holy Communion Mass of two friends of mine; otherwise I'd have departed in wrath (and probably shaken the dust from my feet). Listening to the strange plainchant of the new propers I was seething and took it upon myself to expose Traddieland for what it is. I mean, it is rather nauseating having to see on other blogs sycophantic nonsense such as ''oh what lovely lace father,'' ''oh how traditional, lovely Roman cut vestments and six candlesticks,'' extraordinary forms and mutual enrichment, and blah blah blah...

If anyone in their insolence would supplant the traditional feast of the holy Apostles Philip and James and celebrate the pseudo-feast of Joe Communist because of Ultramontanism and pastoral expediency, let him be anathema.

If anyone even names ''St Joseph the Worker'' in honour, let him be anathema.

If anyone disagrees with me on this point, let him be anathema.
Posted by Patrick Sheridan at 12:05 pm
Email ThisBlogThis!Share to TwitterShare to FacebookShare to Pinterest