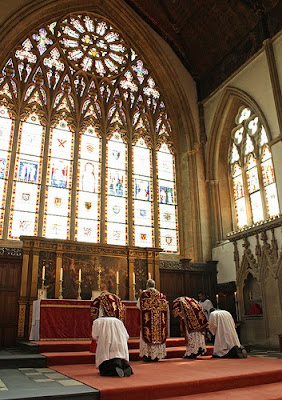 I find it terribly amusing that those who accuse me of Jansenism are often those who have a Confiteor before the distribution of Holy Communion at Mass. Is the rationale for doing away with all those Misereres at Tenebrae because they were repetitive? Most likely; but the reason the ''third'' Confiteor was done away with was not so much because the Ministers had already made their confession and received absolution before they ascended the Altar at the beginning of Mass, but because to have another Confiteor smacks of Jansenism; apropos the abolition of the ''third'' Confiteor is not something to be lamented, but praised, since it rids the Eucharistic liturgy of Jansenism.

Food for thought, perhaps, but who am I, so untutored and sinful, to sift the wheat?
Posted by Patrick Sheridan at 3:09 pm
Email ThisBlogThis!Share to TwitterShare to FacebookShare to Pinterest