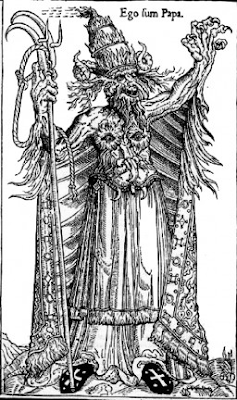 I visit many churches, and know many Christians of different confessions. I don't quite fit into any of them anymore - if anything I guess I would feel most comfortable as a Mediaeval English Catholic, though that world is dead, and gone, and can only be pieced together in such places as Westminster Abbey where Common Worship is used on Sundays and feasts. I go regularly to an Anglo-Catholic church for Sunday Mass, though I can't say that I identify with either Baroque liturgy or most Anglicans. I have great sympathy with ''Western Rite Orthodoxy,'' though I am genuinely appalled at most attempts at ''Western'' liturgy by most Orthodox, and find their prejudice against everything ''Western'' more than just a bit ignorant.

Today is one of those days where you just wish that the Papacy had died out centuries ago, along with other less pernicious heresies. It is, of course, the pseudo-feast of ''Christ the King,'' and is, as Rubricarius points out, one of those more spectacular occasions where one pope contradicts another in the space of less than 15 years. If Papal authority is such a good thing, what is the use of such authority when it is scarce consistent, and one pope can undo the work of another at the stroke of a pen? If Tradition is so inextricably linked up with the will of the pope, then I marvel that the Roman Church has any tradition intact, since the popes are so wayward and have no love for it. It was hard for me, even as a ''traditionalist,'' to get enthusiastic about a feast no more than six years older than my grandmother, and fraught with so much reactionary theology. Does anybody give a crap about the ''social kingship'' of Christ as expounded in the writings of Pius XI? Lace cottas, Fatima shrines, Jesuits lurking in the shadows, name your cliché. It's all just tacky and dangerous, and it fills me with wrath.

Roman Catholics out there seem to think that my eschewing of the Papacy is something as strange and crooked in me as something else which I don't let on about. Perhaps I just can't get my head around looking thither to solve all the liturgical problems of this world, since it seems to me that the Papacy was to blame in the first place. Unless I am quite mistaken, every minute change in Liturgy and ''canon law'' was at the will and command of the pope. But no, we'll just carry on with our Joseph the Workers, and our Signum Magnums and let on, to ourselves and to the world, that what we're doing is genuinely for the good of the Church. I mean, if it's in Latin, and the altar has six candlesticks and a crucifix, it doesn't really matter whether you face the right way, or you use liturgical texts composed by some pen pusher in the Vatican, scanned over and over by a team of experts for heresy, does it? Just feel smug in your deluded sense of Tradition and look down your nose at schismatics and other non-Ultramontane types. What is Tradition compared with the will of the Dark Tower, the Holy Father, even...

For such reasons, and others, I doubt I shall ever pray with Roman Catholics again. It is their obstinacy in heresy, particularly their beliefs about the Papacy and 20th century liturgy - this is the crux of the whole argument. The Lutheran image above pretty much sums up my personal beliefs about the Papacy.
Posted by Patrick Sheridan at 11:48 am
Email ThisBlogThis!Share to TwitterShare to FacebookShare to Pinterest