How Ultramontane was he again? 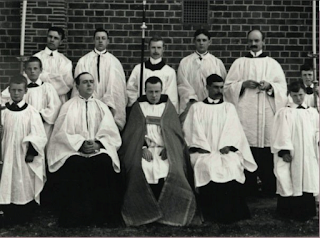 Not a bit of lace in sight!

I have been missing you horridly at breakfast, though the salutary vision of you fully vested and waiting with lacerating meekness in my sacristy when I rolled out of bed has not yet lost its effect. The nuns (little pink daughters of the penitent thief) are here now; so I get up at 7 o'clock, like an early Christian martyr. Sister Joanna Baptista of the Pinnacle of the Temple L.P.D. of P.T. (the she-superior) is a Tartar and won’t stand no fooling, nor can I imagine her waiting meekly as you did, though she would wear vestments like a shot if I let her. This order is an entirely new idea of my Rector at the German Church (a Bohemian monomaniac): its originality consists in the fact that the members go to the Sacraments several times during the year, abstain from fleshmeat on all Fridays, and endeavour generally to cultivate a spirit of Christian virtue and untarnished morality. These proceedings are rightly supposed to be very gratifying to the better nature of the penitent thief – hence the order’s name.

Also they have 15 little boys, so that when you come at Christmass you shall have no lack of servers. They sing Vespers in the evening in what purports to be the Latin tongue, Sister Philipina Canaria (of the way to Jericho) wearing a cope and a Roman missal, from which she tells me that she always sings Vespers.

They have given me a picture of a gentleman whom I recognise as that illustrious prelate the present incumbent of the Roman bishoprick: I am informed that if I look at it in the proper spirit it will give the pontifical blessing – a striking sight which I am naturally anxious to enjoy. Hitherto I have not succeeded in convincing it of my spiritual propriety. I have told it all the things that I think it would like to hear – that I am dead nuts on encyclicals, that ubi Petrus ibi the whole shew, that Roma locuta est (she never stops) nulla salus est (I hope I haven’t got this mixed); I have even said polite things about its fel. Rec. predecessors of the X and XV centuries; alas, in vain! It hasn’t once burst into: Sit nome Domini benedittumme [sic]. When you come I hope you will start it: it can’t doubt your propriety of spirit!