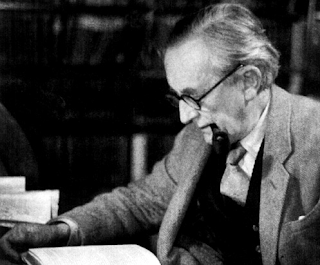 This could be the subject of a thesis and I don't know either way what Tolkien thought of controlled immigration (after the Second World War), let alone mass immigration and the current "migrant crisis." Tolkien is, after all, a German name even if Tolkien's Suffield ancestors were Mercian. But enough can be gleaned of Tolkien's opinions by careful reading of his work, some of which is provided here. The bold type is my own, of course.

1. "In this way it came to pass that the Edain dwelt in the lands of the Eldar, some here, some there, some wandering, some settled in kindreds or small peoples; and the most part of them soon learned the Grey-elven tongue, both as a common speech among themselves and because many were eager to learn the lore of the Elves. But after a time the Elf-kings, seeing that it was not good for Elves and Men to dwell mingled together without order, and that Men needed lords of their own kind, set regions apart where Men could live their own lives, and appointed chieftains to hold these lands freely." The Silmarillion, Chapter 18.

2. "Now the Green-elves of Ossiriand were troubled by the coming of Men, and when they heard that a lord of the Eldar from over the Sea was among them they sent messengers to Felagund. 'Lord,' they said, 'if you have power over these newcomers, bid them return by the ways that they came, or else to go forward. For we desire no strangers in this land to break the peace in which we live. And these folk are hewers of trees and hunters of beasts; therefore we are their unfriends, and if they will not depart we shall afflict them in all ways that we can.'" Ibid.

3. "Into Doriath shall no Man come while my realm lasts, not even those of the house of Bëor who serve Finrod the beloved." Ibid.

4. "The Easterlings came into the land in great numbers and they dealt cruelly with the people of Hador, and robbed them of all that they possessed and enslaved them. All the people of Húrin's homelands that could work or serve any purpose they took away, even young girls and boys, and the old they killed or drove out to starve." The Children of Húrin, Chapter IV.

5. "'What is a thrall?' said Túrin.
"'A man who was a man but is treated as a beast,' Sador answered. 'Fed only to be kept alive, kept alive only to toil, toiling for fear of pain or death. And from these robbers he may get pain or death just for their sport. I hear that they pick some of the fleet-footed and hunt them with hounds. They have learned quicker from the Orcs than we learnt from the Fair Folk.'" Ibid.

6. "Thus at last he came back to the land of his childhood. It was bleak and bare; and the people there were few and churlish, and they spoke the harsh tongue of the Easterlings, and the old tongue was become the language of serfs, or of foes." Ibid, Chapter XII.

7. "With that the old man stayed his tongue, and eyed Túrin doubtfully. 'I am old and I babble, master,' he said. 'Mind me not! But though it be pleasant to speak the old tongue with one that speaks it fair as in time past, the days are ill, and one must be wary. Not all that speak the fair tongue are fair at heart.'" Ibid, Chapter XII.

8. "'No one comes nigh Bree now from Outside,' he said. 'And the inside folks, they stay at home mostly and keep their doors barred. It all comes of those newcomers and gangrels that began coming up the Greenway last year, as you may remember; but more came later. Some were just poor bodies running away from trouble; but most were bad men, full o' thievery and mischief. And there was trouble right here in Bree, bad trouble. Why, we had a real set-to, and there were some folk killed, killed dead! if you'll believe me.'" The Lord of the Rings, Book VI, Chapter 7.

9. "Mr Butterbur shook his head. 'If there's a few respectable folk on the roads, that won't do no harm,' he said. 'But we don't want no more rabble and ruffians. And we don't want no outsiders at Bree, nor near Bree at all. We want to be let alone. I don't want a whole crowd o' strangers camping here and settling there and tearing up the wild country.'" Ibid.

There are other quotes, of course, but I'll just let Tolkien speak for himself...
Posted by Patrick Sheridan at 11:47 am
Email ThisBlogThis!Share to TwitterShare to FacebookShare to Pinterest