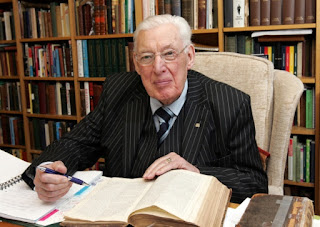 I saw this on Twitter yestereven. The late Lord Bannside's impressive library is now open to the public. The collection has some 55,000 volumes on books as various as papal biographies to love stories. I wish I could go but I am lately back from Ulster and I doubt I could find an excuse to go this time, and I am sure "Ian Paisley's library" wouldn't go down well with my mother, who always hated the man. I'm not sure if it's up yet but a catalogue of the library is being prepared. It would be encouraging for me if we shared some of the same books!

55,000! It clearly took him a lifetime to assemble them. And I used to think that my grandparents' 3,000 strong library was impressive! My own is diminished these days. I may have told you before but sometimes, not so often these days, but I have at whiles suffered spasms of puritanical rage in which the very existence of a book in my living space becomes intolerable. I'm afraid that Michael Davies' trilogy, a 1964 altar missal, among several that I could name, were consigned to the flames. Good to know that Lord Bannside, a principled man until 2007, was more tolerant than me! What does that say about me, I wonder.
Posted by Patrick Sheridan at 12:24 pm
Email ThisBlogThis!Share to TwitterShare to FacebookShare to Pinterest