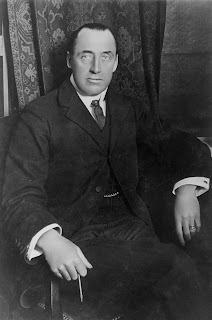 We commemorate far too many anniversaries in Britain and I think that many of them could be dispensed with without any significant loss of either patriotism or due deference. Every Armistice Day, for example, lots of people stand in silence at the Cenotaph to commemorate the fallen of the two needless and bloody conflicts that destroyed countless lives (and religion, morality, and much else) in the last century. Before you say, "oh, he's off again," just consider how intertwined with religion these commemorations are. When else, other than at state funerals and royal weddings, would you see Anglican clergymen in surplice, tippet and hood? It's as if those clergymen are the witnesses of their own dirge. 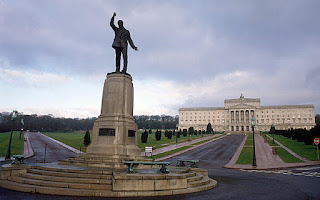 But I've digressed already. To-day is an important anniversary for Ireland. It is the 80th anniversary of the death of Sir Edward Carson, the prime mover of Unionism in Ireland from 1910. If he is remembered at all to-day it is as Queensbury's counsel at the trial of Oscar Wilde, an unfortunate legacy for so great a statesman. Unlike many contemporary unionists Carson was a singular Unionist. As a Leinsterman he argued against Home Rule from the perspective that the whole island of Ireland was better off in union with Britain as opposed to just the Ulster province. At least he held this view until he came under the influence of James Craig, the man chiefly responsible for Partition. In 1912 Carson drafted his Solemn League and Covenant, which was signed by 237,368 men (my great-grandfather was one of the signatories). I wonder if, post-1998, Carson will get even a cursory mention by BBC Northern Ireland, or RTE? I mean he was given a State Funeral. At the very least he is remembered by me, and by my fellow Unionists in Ulster to-day. May he rest in peace. 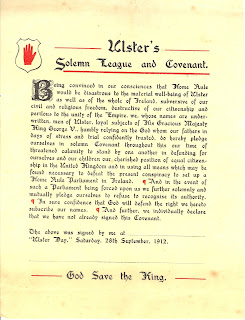 Since our Union matters not a bit compared with the monster European Union it's an interesting day to reflect upon the life's work of one of Britain's and Ireland's patriots. I believe Lord Carson was the Lord Bannside's hero.
Posted by Patrick Sheridan at 9:00 am
Email ThisBlogThis!Share to TwitterShare to FacebookShare to Pinterest