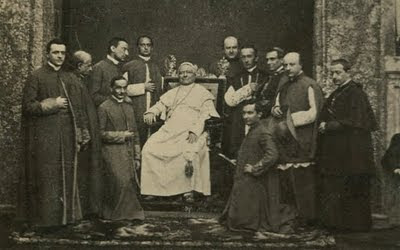 Don't you just hate it when, in discourse with, say, an atheist, you utter a truism such as ''God exists,'' and they reply with something to the effect of ''yes, but only to you.'' What is wrong with this answer? It is precisely that by implication truth is seen as something individualistic or even solipsist, existing not of itself and having a quality independant of human reason and opinion, but solely in the fallible minds of men, which soon wither and make mistakes. The only ultimate logical consequence of adhering to this serious blunder in the human faculty of understanding is that religion has nothing to teach us which is in any way meaningful or needful for us to know since we can all make up our own minds about morality, revelation, the ordering of our lives according to a purpose far greater than us, and even the very existence of God. But this is not so, and the ''only to you'' mentality is a lie which comes from the Foe of God and men, ordered to the subversion of religion. Truth is not something relative among men and something which shifts in nuance or emphasis from one generation to the next. Truth is something constant and eternal, since it emanates from God.

It is as true a thousand years ago as it is today that Tradition, for the sake of argument, has a quality of Truth measurable in the economy of Salvation quite independant of the Papacy. The Fathers of the ecumenical councils were conscious that they taught nothing new, that is to say, nothing which was not consonant with the Tradition of the Church - this in itself sheds an interesting light on the attitude of the fathers of Chalcedon (A.D 451) who, when assessing the famous Tome of St Leo, were not so much interested in Ubi Petrus, or Roma locuta (she never shuts up!), but whether or not the Tome agreed with the Christology of St Cyril of Alexandria. I say interesting, but I mean demonstrably disconsonant with the later attitude of the Roman Church about particular utterances of the Roman Pontiff ex cathedra. Let us say for the moment that I accept all that the Roman Church teaches about the Pope, and I believe also that Tradition has a special auctoritas independant of the will and whim of the reigning Pope. Would I not have on the one hand to confess that the Pope is guilty of tampering in the Tradition by looking to the contemporary wasteland of Roman Liturgy, and to trace this back to the decrees of 19th and 20th century popes; and on the other to accept (baldly) that the Pope is free to act, according to the ontological Petrine charism founded upon Christ's ordinance in the Gospel, to renew, reform, articulate in a manner more intelligible for modern man, those institutions in the Church subject to him (Liturgy, Doctrine, the decrees of ecumenical councils, etc). Perhaps I have overstepped the mark. The ideal, very attractive, is that the Pope is the guardian of the Divine deposit, the defender of Tradition against innovators, the smasher of heretics. This has at least the semblance of Truth, and I would, in deference to my Patriarch, render obeisance to this truth, if I had not the knowledge and experience that it is all too romantic. Modern day apologists for the Papal claims speak of the limits of the Papacy, oftentimes citing the then Cardinal Ratzinger on the spurious idea of Papal ''despotism.'' Very good, very good indeed - but do they not conveniently miss the entire point? It is the agony of a mind in doubt - clinging to the idea of a sublime Petrine ministry, perfectly convenient in the Church, and the reality which is at stark contrast - that the present authority of the Pope is something which far exceeds the legitimate authority of any bishop, however exalted his office or apostolic his See. It is almost as if the Pope were to say: ''I can trample upon Tradition, but only so much,'' and making an exhibition of his efforts. It is not so much Popes acting upon the mandates of ecumenical councils that I have a problem with, but rather that which goes before; namely, the idea that the Pope has authority enough to teach independant of Liturgy and Tradition. Let me explain.

We all know about the famous infallible pronouncements of 1854 and 1950. The measure of truth inherent in Ineffabilis Deus is beyond the scope of this post, but the implications of the existence of this constitution are relevant. Romans fondly suppose that Ineffabilis Deus was an example of the Pope putting an end to an age-long debate between the Franciscans and the Dominicans about whether or not the Blessed Virgin Mary was conceived without sin. I suppose it was, in the sense that uniformity in doctrine is an ecclesiastical ideal - or is it? My view is that since Man must be redeemed after a manner wholly consonant with his nature, the implications of the new dogma detract somewhat from this, but this is irrelevant. Does unwavering assent to a doctrine not necessary for salvation, based upon the authority of the Pope to define it so, guarantee one's personal orthodoxy? Whether or not the dogma is wholesome is irrelevant to the discussion. What I have issue with is why the Pope decided to replace the old propers for the feast of the Conception of St Mary with new ones - thereby divorcing himself and the rest of the Roman Church with the ancestral Liturgy of this day, and therefore the ancestral impetus for assent to the teaching (or at least a primeval, probably more orthodox, form of it). What really happened afterwards in the south of France, I wonder?

The exact same thing happened in 1950 with the promulgation of Munificentissimus Deus. The doctrine of St Mary's Assumption has a different flavour of orthodoxy compared with the Conception, but the same principle applies. Why did the Pope change the Propers? You want my opinion? I think that in both cases it is not so much about settling disputes over ecclesiastical discipline and orthodoxy but the authority of the Pope to say what he likes. The fact that he changed the propers on both occasions indicates that it is not about Our Lady at all, but about belief in something about St Mary because the Pope said so. What the pope has done is replace Tradition with himself. These are just two examples, and noteworthily the only two ''infallible'' pronouncements of popes in the history of the Church. What Pius XII did to the Sacred Liturgy, upon his own authority and no other, is a matter which would take long as years of torment to tell.

Of course we all of us agree that there is a problem in the Roman Church today; where the Romans and I differ is where we place the blame. That the problem goes much deeper than the 1960s, that it's something inextricably linked up with a huge misinterpretation of Scripture (or whatever else), is something which puts the Traddies out of reckoning. If I say that the Pope is guilty of tampering (and he is), they accuse me of error for thinking so. I'm bored with this now, I have theatre tickets to book, so I shall conclude with an observation that the Roman Church's confessedly heroic stance against doctrinal relativism is a stinking red herring, in the light of all that I have said, since the Pope is himself guilty of the same - by tampering here, emphasizing this there, and all of this in order to accomodate the spurious, ill-defined ''development of doctrine'' - or was this invented to conveniently explain away the want of continuity and tradition in the Roman Church?

And so it all boils down to two things. Either you accept Christ, and take the consequences, or you do not, and take the consequences. Maybe one day I shall again bend the knee to Rome, but something drastic will have to happen first. There are just two possibilities - either the claims of the Pope are true, and therefore it is necessary to be subject to him; or they are a damnable falsehood inimical to the Gospel. The Book of Ecclesiasticus puts it succinctly: He has set water and fire before you: stretch forth your hand to which you will (15:17). There is no ''only to you'' about it; either I am in error for rejecting the Pope, or I have, by God's Grace, been set at liberty by rejecting him. Lord grant that I have chosen rightly...
Posted by Patrick Sheridan at 1:45 pm
Email ThisBlogThis!Share to TwitterShare to FacebookShare to Pinterest