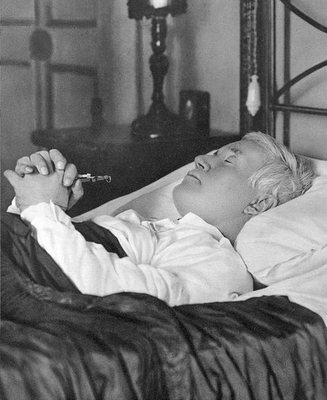 It seems that Lotho of that awful, awful 'blog Rorate Caeli is praising the work of Pius X, the pope of the Liturgy, and his bull Divino Afflatu, now in its centenary year. My contribution, ''vile'' and bethought of ''bitterness'' apparently, was sadly removed. Please forgive this old traditionalist if he is less than enthusiastic about the legacy of a man who wrought more damage in the Roman Church at the stroke of a pen than anyone up to that time. Pius X is no saint, though he was canonized by Pius XII as the wheels of his great engine to drive out Tradition were turning in the offices of the Lateran. And what are the implications of that? It was not in idle fancy that the order of psalmody of the Hours, an order probably known to Our Lord Himself in the Temple, was overturned. Maybe others who know of this unfortunate reform attribute sentiments and intentions other than pure malice and the intoxication of power to Sarto, but knowing something of the history of Liturgy, and the dealings of the popes therewith, one cannot help but wonder whether that bloated Office has served any good end in the West for a very long time. A very long time indeed.

Never mind. God alone sees all ends, so I'll just surrender judgement of those men in scarlet and white, dwelling on the city with seven hills, etc, to Him. The link to Rorate Caeli has now been removed from my blogroll. I'm surprised it took this long.

The photo (which hitherto I have never seen) is of Pius X, dead or dying on his deathbed, clutching a crucifix. I would say ''blessed are the dead which die in the Lord,'' but I can't; I just can't.
Posted by Patrick Sheridan at 12:08 pm
Email ThisBlogThis!Share to TwitterShare to FacebookShare to Pinterest