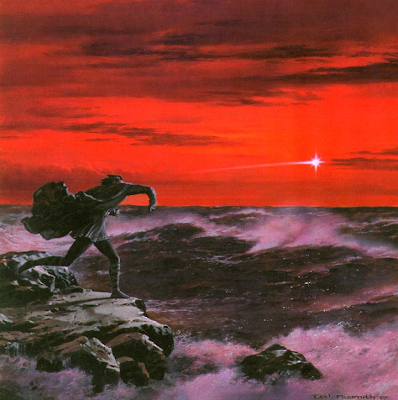 ''From high places it is easy to fall low.'' (J.R.R Tolkien).
I spent a beautiful day yesterday with a dear friend of mine, who understands me better than many who are accounted wise, even those who have known me for many years. On my way home I bumped into someone else, an acquaintance from my Traditionalist days. Neither of us had much to say to the other, and upon taking leave of each other I was conscious of two things: that I had verily ''burnt the bridges,'' and that I had done good business having done so. A lot of people accuse me of fanaticism and intemperance; that I spend my time criticizing others about the celebration of Liturgy, whilst I do not actually contribute anything myself in the manner of organising practical Liturgy, conferences, training, research, or whatever. Well, that's too bad. Years ago, when I took an active part in parish liturgical life, nobody took any notice of me, and the only decision I ever got to make was over the choice of one type of Roman cut chasuble over another. My suggestion of Terce before Mass on Sundays fell upon deaf ears, for example, not to mention a host of kalendrial disagreements, ornaments, rubrics, ceremonial and, of course, lace ornamentation.

Heretofore I have let it be known that I am autistic. This was detected by an obscure paediatrician at a child guidance clinic 18 years ago. Be that as it may, my mother would have none of it, and with painfully strict correction (''look at me when I am talking to you, Patrick; LOOK at me!''), I have more or less led a ''normal'' life, and I strive every day not to live under the label, and to live life according to the social and moral principles upon which society is builded. Nevertheless I have my own principles which I will not compromise, nor will I have anything to do with people who oppose them. What was it that Erendis said to Ancalimë? ''Sink your roots into the rock and face the wind, though it blow away all your leaves.'' (I put the sense into my own words because I am sundered from my Tolkien books). This quote may demonstrate the problem.

''As children develop, they become more mature and skilled in the art of persuasion, compromise and management of conflict. They are increasingly able to understand the perspective of other people and how to influence their thoughts and emotions using constructive strategies. Managing conflict successfully requires considerable T[heory]o[f]M[ind] skills, therefore one would expect difficulties in conflict resolution for children and adults with Asperger's syndrome. Observations and experience of conflict situations suggest that children with Asperger's syndrome are relatively immature, lack variety in negotiating tools and tend to be confrontational. They may resort to 'primitive' conflict management strategies, such as emotional blackmail or an inflexible adherence to their own point of view. They may fail to understand that they would be more likely to achieve what they want by being nice to the other person. When an argument or altercation is over, the person with Asperger's syndrome may also show less remorse, or appreciation of repair mechanisms for other people's feelings, such as an apology.'' (Tony Attwood, The Complete Guide to Asperger's Syndrome).

I don't know what it is. Perhaps neuro-typical people have struck some balance between principle and compromise to which I simply cannot aspire. I know from experience that arguments I've had with people always end up with a great degree of resentment or estrangement, on both sides. Whereas I am bewildered by arguments others have had, where later they are seen to be getting on as though nothing has happened.

In the universal endeavour to restore ''traditional Liturgy'' (whatever that may be) it behoves all of us who love Truth and the Tradition of the Church to cultivate various qualities; honesty, patience, forbearance, hard work, etc. I bided my time, waited for a change of days, of dispositions, and prayed earnestly, but came to nothing. This was precisely because I was working with, and praying with, people who didn't desire with their hearts the things of my own. I desired the tradition of the Church unmolested by the will and commands of the pope; they didn't. I desired the spirit and patrimony of the Middle Ages; they didn't. These were Roman Catholics, those Ultramontane types who prefer intellectual assent to the pontifications of a foreign bishop with a bloated office to the actual Tradition of the Church. With many a Sieg Heil to encyclical this, motu proprio that, and it's 1955 all over again. Problem solved! I have reached the stage now where I wish them ill and that all their works perish from this world - that may well be realised when the next pope comes along and renders all the liturgical legislation of the current one void. I tried other communions but to a great extent they just emulated the problems of the Traddies. 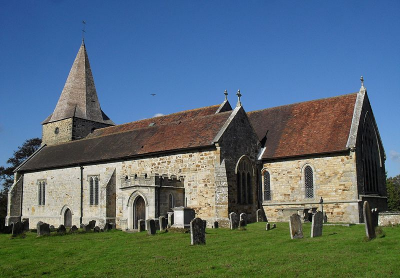 The parish church of St Margaret the Queen at Old Buxted. St Margaret is, incidentally, one of the patron saints of this 'blog.

So with whom, exactly, do I work to restore the tradition of the Church, when few seem to agree with me? The restoration of Liturgy is, in spite of the prejudice of the Sackville-Bagginses, an ecumenical affair, as much the province of Anglicans as Orthodox and Roman Catholics alike. Yesterday I was stood in a house chapel, no bigger than a walk-in wardrobe, and I thought then that the Church was verily driven into new catacombs, and that it had gone unnoticed by the great mass of many who claim, or aspire to, the name Catholic. If the Church is indeed to be found at all then I daresay it is in tiny pockets of liturgical orthodoxy around the world. In which case the work of restoration is indeed going to be hard. My friend and I were talking about the history of Liturgy on the way to a 13th century country church yestereve. We both agreed that it was a sad story, ''as are all the tales of Middle-earth,'' as Aragorn said. What saddens me is that most people don't see it, and seem bent on the exaltation of a period and ethos in the Church opposed to the spirit of the Sacred Liturgy. In sooth then did Tolkien utter those words.

The painting (by Ted Nasmith) depicts Maglor, one of the Sons of Fëanor, casting a Silmaril into the Great Sea. It is haunting for me since it depicts the ''end'' of the Elder Days, and I spent a good while thinking about it today. Those of you who remember the terrible oath of Fëanor and his seven sons might glean some similarity with my thoughts...
Posted by Patrick Sheridan at 7:58 pm
Email ThisBlogThis!Share to TwitterShare to FacebookShare to Pinterest