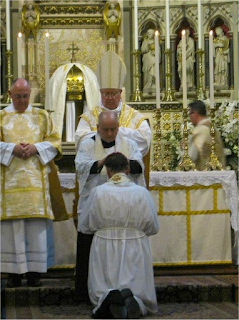 Imaginary conference with Mr John Hunwicke, a minister of the ''Ordinariate of Our Lady of Walsingham,'' formerly Father John Hunwicke, priest of God in the Church of England. (As of now, in deference to my conviction that Roman orders are absolutely null and utterly void, I shall cease to refer to any Roman cleric by the sacerdotal title ''father'').

Mr Hunwicke, for forty years you believed yourself to be a validly ordained priest, is that correct? My question is, at what point did you cease to believe this, and why? Surely if Grace (which is not a comodity dispensed by clerics, even very important ones) exists outside the confines of the Roman church, which claims to be the True Church of Christ, was there any need of your ''re-ordination?'' Do your newfound Roman Catholic friends think anything at all of your lifelong ministry in the Church of England? And what would you say to them that claim that the quality of your old 'blog waned the closer you came to your conversion to the Roman church?

Answer me all that, and I'll shew you a green dog. Incidentally, a Roman priest admonished me yestereve that we ought all to rejoice in John Hunwicke's ordination to the Roman presbyterate. ''We'' ought? said I. The once great man has been deluded and manipulated by a gigantic fraud, seduced by the scarlet whore, whose mission seems to be to trample Tradition under foot. Wherefore, then, should we all rejoice at what is demonstrably sacrilege of the worst kind? Upon seeing such photos as these I felt just as I felt years ago when I read that Gay Rights activists had thrown used condoms onto the altar of a church in New York - disgusted.

Oh well, at least the Ordinariate has to give all that money back to the Confraternity of the Blessed Sacrament. As a friend said, ''That should finish the Ordinariate off nicely.'' May it please God!

I saw this photo here.
Posted by Patrick Sheridan at 12:17 am
Email ThisBlogThis!Share to TwitterShare to FacebookShare to Pinterest