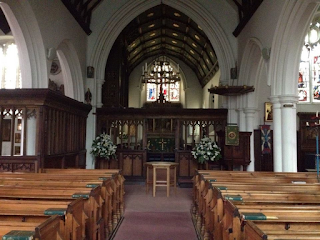 Yestermorn I went to a service of choral Mattins in a fairly mainstream Anglican church not far from here. Mattins is a decent, scriptural and increasingly rare service nowadays, and confessedly it was my first experience of it in a parish church rather than somewhere like Westminster Abbey or St Paul's Cathedral. Parochial but pleasant, and I have every intention of going again. The order of the liturgical day was rather muddled, with an 8 o'clock BCP said Holy Communion, followed by a sung ''family Eucharist'' at half past nine of the clock, and then Mattins at 11:15. It would be much better to have Mattins, Litany and Holy Communion, all 1662 Prayer Book, and done up Sarum fashion with a procession, but at least the effort is there. I was talking to the Rector afterwards, who expressed his dismay at the attitude, so prevalent nowadays, of calling off services because of insufficient numbers, and that only two weeks ago he had said Mattins antiphonally with two other people.

I must say that incorporating the Eucharistic liturgy into the Office of the Sunday, or any day whatever its rank, gives one a proper sense of perspective - about the Blessed Sacrament, liturgical prayer and the corporate worship of the Church. Now if only the Roman church did something similar? But no, go into any Roman church at random and your program of services is Mass, on the hour every hour. It makes me physically sick.
Posted by Patrick Sheridan at 5:39 pm
Email ThisBlogThis!Share to TwitterShare to FacebookShare to Pinterest