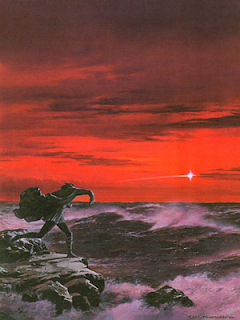 I'm glad I was at work today; it took my mind off things papal.

Today is one of those days that my blood runs cold within me, and I wish that the papacy were forever banished from this world. Centuries and centuries of unchanged Tradition, gone forever at the stroke of a pen. The Roman Rite is accursed, ruined by ancient hatred and power. Those who inherit this burden of tat, and propound it as good for the soul, are liars without shame. I am actually beginning to despise anyone who celebrates the modern Roman Rite, in whatever form. Who could go to Mass on this day and not think of Gaudeamus without intense longing? Whose ears could endure the atrocious Collect of this day and not be filled with wrath, and a burning hatred of the papacy, destroyers and usurpers? Only the Ultramontanists, possessed of devils, and doing only his will in their madness. I no longer desire any part in the Roman Rite, and wish I could forget all that I know (which, confessedly, isn't much) about it. Even if anyone could resurrect the Uses of the mediaeval English Church, it would be empty, shorn of authenticity, and all that's left would be sentimentalism, nostalgia, and regret about the waning of lore and the passing of the years.

But maybe this was doomed to be. Good liturgy is a thing of the past, gone long into the grave with out catholic ancestors, and all that is left will die out with my generation. Knowledge of Latin and Greek is waning among men, so also is the memory of things past, things needful for the wise to know. There is no hope left, which is why I have disavowed religion - or at least religious people. Does anyone remember the vision of the hobbits on the Barrow-downs, of the shadow-shapes of Men, a great expanse of years behind them, marching with bent backs in the shadowy hills? Do we not, like the Company of the Ring, observe the passing away of all that is fair, while we sit helpless on the shores of a grey and leafless world?

All I can say now is alas, alas for Our Lady.

Art: Ted Nasmith. The painting depicts a scene from the Quenta Silmarillion to rend one's heart, and says more to me about this once wonderful day than can be expressed in words.
Posted by Patrick Sheridan at 6:44 pm
Email ThisBlogThis!Share to TwitterShare to FacebookShare to Pinterest