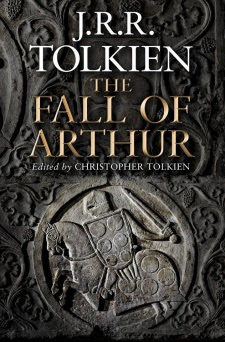 I would like to draw your attention to a new Tolkien publication, and one which I have awaited eagerly for some years now, namely: The Fall of Arthur. It is an English lay, composed by Tolkien sometime between 1930 and 1934, in alliterative verse and was his one and only venture into Arthurian legend. Although his friends and critics besought him to finish it, like so much else it was abandoned, probably sometime around 1937 (the year in which The Hobbit was published) and he never returned to it. Towards the end of his life he complained that he was running out of time, that there was so much yet to do and to complete, but his meticulousness renders that hardly surprising. But that's not a defect. And the irony is that I admire Tolkien for that, perhaps more than anything else, for it exemplifies his genius.

I pre-ordered my own copy from Amazon and I am expecting it on Tuesday morning. I hope I have the ability to read it.
Posted by Patrick Sheridan at 1:38 pm
Email ThisBlogThis!Share to TwitterShare to FacebookShare to Pinterest