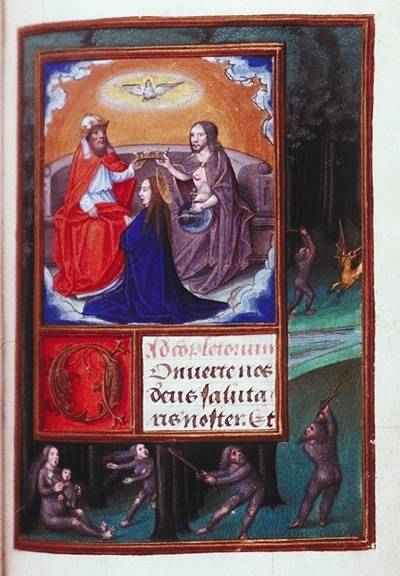 Púkel-men (as in Shakespeare's "Puck"), or Wild Men, woodwoses and other names besides, seen in a 14th century Italian Book of Hours. Pretty aren't they?! I first discovered the word "woses" in a Christian context in a polyglot bible (in Gothic, Old English, Tyndale and Authorized translation) in the Heythrop Theology library. Wycliffe used it therein to refer to the "doleful creatures" of Isaiah and in the tale of Nebuchadnezzar. Their appearance in Christian art during the Middle Ages is curious. Tolkien adopted them in The Lord of the Rings; for those of you who have read Tolkien, you may remember the ascent of the Rohirrim into the foothills of the White Mountains. On the slopes of Dunharrow there were many shapeless statues of a forgotten race whom men called "woses." I think their presence in Christian art was to exemplify human ignorance or barbarism. Seen here in the context of the Blessed Trinity, and what appears to be the Coronation of St Mary...I wonder what the artist intended?
Posted by Patrick Sheridan at 9:00 am
Email ThisBlogThis!Share to TwitterShare to FacebookShare to Pinterest