Praise ye The Lord, part one... 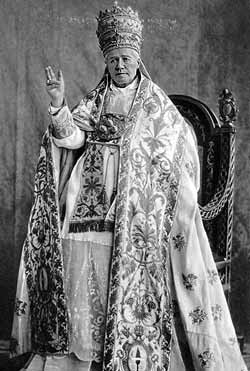 "I suppose the greatest reform of our time was that carried out by St [sic] Pius X: surpassing anything, however needed, that the Council will achieve." The Letters of J.R.R Tolkien, no.250.

blessed Tolkien wrote that to his son Michael in 1963. You may speculate about Tolkien's use of the words "greatest" and "achieve" vis-à-vis the benefits (or malefits) of papal or conciliar reform but what is interesting about this is the conspicuous lack of comment upon the reforms of Pius XII, then only seven years previous. Given Tolkien's earlier rejection of the reformed rite for Palm Sunday, expressed in a private, unpublished, letter to a friend on, of all days, Spy Wednesday of 1956, there seems little doubt, to my mind at least, that, redolent of Tom Bombadil's assessment of Farmer Maggot, Tolkien had wisdom in his bones and both his eyes were open. That he gave his support to the Latin Mass Society in its earliest days is evidence enough that, like his contemporary Evelyn Waugh, Tolkien rejected most 20th century liturgical reform, liturgical reforms that went back to his undergraduate days when all the Sundays went green.

Tolkien's liturgical sentiments notwithstanding he refers to Pius X as a saint. Far be it from me to contradict so learned a man but I am not personally convinced of Sarto's sainthood. His liturgical reforms, the codification of the sacred canons begun during his pontificate, his treatment of Fr George Tyrrell as much as the opinion of his contemporaries are enough to shatter myths of his personal sainthood for me. Like pope John Paul "the Great," hero of the contemporary Roman Catholick church, Pius X always struck me more as a recalcitrant and bullying tyrant than a true shepherd with the lost sheep in his care. His canonisation, however, has effectively elevated his every action above reproach for Roman Catholicks.

The Sarto liturgical and canonical reforms are little known to-day, even less known than the comparatively trivial reforms of Pius XII. They began in A.D 1903 with the publication of the motu proprio Tra le sollecitudini on sacred musick. I have always been torn on this motu proprio, even to this day. On the one hand, I think it a praiseworthy effort to restore, at least in principle, the primacy of Gregorian chant, of choral worship, the exclusion of women from church choirs in accordance with the Scriptures, and so on; but on the other hand I cannot ignore the deference it makes to the inauthentic Solesmes tradition, the ban on Castrati and the implication that the Italianate pronunciation of Latin is the only acceptable form. Of note is Sarto's use of the term "partecipazione attiva." As this encyclical was curiously published in Italian first rather than Latin (so as to be wider read, perhaps?) I find it strange that apologists for Sacrosanctum Concilium (which famously incorporated the term), like pope Benedict XVI, ignore the fact that the "actuosa et communitatis propria celebratione participare possit" enunciated by the Council had its uttermost origins in an Italian phrase which literally means active participation. The distinction is otherwise condescending and irrelevant. It might seem an uncomfortable truth to some that Pius X, hero of Traddieland, was in this sense (and others) the fount of all innovation. 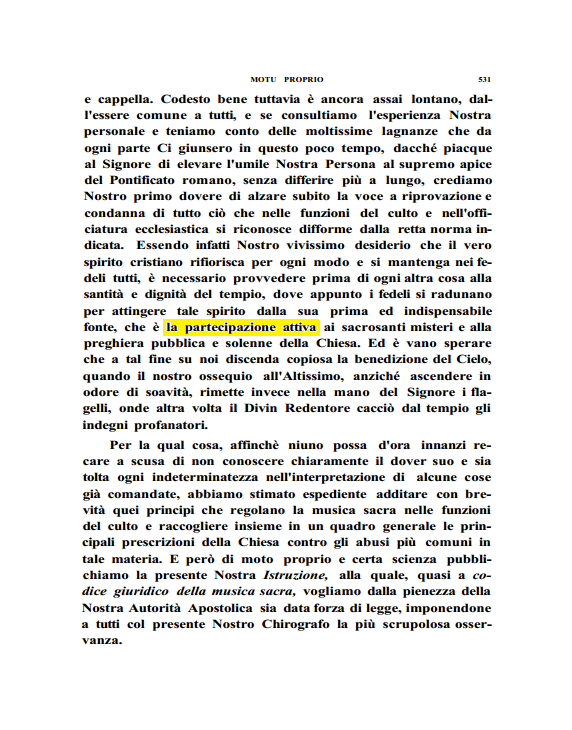 To the mediaeval mind there was nothing more serious than an oath. Húrin and Huor, the sons of Galdor, swore an oath before Turgon, High King of the Gnomes, in Gondolin never to reveal his secret counsels or the location of the city. In after years Húrin suffered greatly bound to that oath. Fearing greatly for the integrity of Roman church teaching, Matthew 5:37 notwithstanding, in 1910 Pius X imposed the famous "Oath against Modernism" on the unhappy clergy of the Latin Rite. I myself once swore that oath. When I was 16 or 17 I remember printing the text and pasting it into a Bible. That Bible has since been given away though the text is, I believe, still on one of my bookshelves, in my copy of the 1917 Code of Canon Law. As you all know, the raison d'être of the Oath was that men like Fr George Tyrrell, that brilliant and astute Irish gentleman, were preaching monstrous doctrines, doctrines later adopted by Rome herself in a shift of delicious historical irony. Intellectual integrity and science had to be sacrificed on the altar of absolute, blind obedience to the "holy office" and the prisoner of the Vatican. I cannot imagine that it was ever taken very seriously. Dr Fortescue complained in a letter to a friend:

"Centralisation grows and goes madder with every century. Even at Trent they hardly foresaw this kind of thing. Does it really mean that one cannot be a member of the Church of Christ without being, as we are, absolutely at the mercy of an Italian lunatic?"

"Give us back the Xth century Johns and Stephen, or a Borgia! They were less disastrous than this deplorable person."

Italian lunatick; deplorable person...spoken like a true Protestant! Were it not for Dr Fortescue's The Ceremonies of the Roman Rite Described, on which they so evidently rely, I doubt very much whether the Traddies would have much time for him. Nevertheless, his exasperation is justified by the trickery, the condescension and the deplorable lack of faith of the old pope himself in the bishops and seminary rectors. Such requirements as this oath are symptomatic of a deformed ecclesiastical polity, conceived solely in the exercise of absolute power.

The Code of Canon Law was published in 1917 but, of course, this monumental work was done principally under the aegis of Pius X. While the codification of the Sacred Canons had intelligible pastoral motives I cannot really say that I have much sympathy for what effectively rendered the interpretation of antient laws an Enlightenment principle. It is true that the Pio-Benedictine Code was based largely upon the works of Gratian and Raymund, contextualised in a modern context, but the publication of the Code reversed an antient legal maxim (in a way strikingly redolent of the reversal of the Lex Orandi by Pius XII) that the older a particular law or custom could be proved to be, the greater auctoritas it has for us to-day. There is a goodly article published in The Remnant here which treats of the codification of Canon Law and precedent it set for later liturgical reforms. These quotes synthesise the whole point perfectly:

"One way to see the stark difference in approach between Traditional legal systems and modern ones (such as the Code of Canon Law) is to look at the relationship between authority and time. In the modern liberal system, authority is linked to novelty. The newer the law, the more authority it carries. Thus, the 1983 Code of Canon Law has greater authority over provisions in the 1917 Code because it has been enacted more recently.

"The Traditional understanding of law was just the opposite. The older a particular law or legal norm could be demonstrated to be, the greater authority attributed to it. Customs which existed “since the memory of man runneth not to the contrary” were seen as much more reliable, and thus authoritative, than newer and novel norms. Opinions of ancient thinkers, jurists, philosophers, popes and saints that had stood the test of time were more authoritative than something dreamed up yesterday. Again the ancient attitude is filled with humility and acceptance of human failing."

Last, but by no means least, the Breviary; Sarto's lasting monument even were all his works made void. I'm afraid I have run out of time and, being a work night, must needs be off to bed. I shall continue this post with a more detailed look at the pre- and post-1911 Breviaries later this week.

The title of this series, by the way, is in reference to the Laudate Psalms antiently used at Lauds.
Posted by Patrick Sheridan at 9:00 am
Email ThisBlogThis!Share to TwitterShare to FacebookShare to Pinterest