The liberation of Britain... 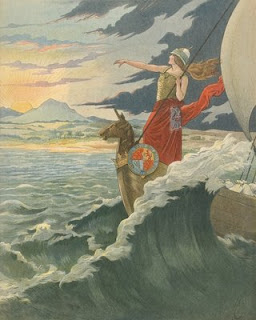 I would be the first to complain, as I have complained, about the "zombification" of the people by a wicked and corrupt elite. Nevertheless, to occupy the time between work and the grave and to shut out the modern world, I sit in my room every day, wrapped in a filthy dressing gown, becoming, as it were, a zombie myself. Ignorance is bliss, as they say. But whenever I do emerge from the depths to either update this blog or watch the news, occasionally I come across something cheerful. Fr Andrew's blog is well worth the read. Not only his latest autobiographical sketch but this succinct and erudite account of Mr Cameron's EU negotiation.

My view? Apart from the fact that Mr Cameron is a snake and a charlatan, a total fake with no discernible conviction, this EU negotiation is hot air. The Conservative Party has been fanatically committed to the European project since, at least, the days of Mr Heath. Party membership, even for men who claim the mantle of Christ (see here), clearly depends upon enthusiasm for everything European, and Conservative party members who claim to be "euroskeptic" are just liars. It would be nice for Britain to secede from the godless EU but it won't happen. The United States won't let us for a start, and neither will the other EU member states. If, in the unlikely event that the Referendum (which I don't believe in, and certainly won't vote in) declared that the British people wished to secede, what difference would it make? I can't see the anti-Christian, anti-British legislation passed in Brussels since the 1970's being systematically undone by a new, nationalist government; can you? No, mass immigration will continue, except this time under the pretext of settling "refugees" and "migrants" from the Middle East and, perhaps because of "Boko Haram," from West Africa; all in the name of humanitarianism. The department for international development will not be closed down; the NHS will continue to be an hindrance to the nation's healthcare, despite its godlike aura. Political correctness will continue to reign unchallenged in public services and institutions. Globalisation will continue; the secularisation of the church Established, or disestablished before long. The nightmare of progress will just go on undisturbed.

In other words, formerly Great Britain is without final hope. As Tolkien said of the desolation about Mordor, Britain has become:

"the lasting monument to the dark labour of its [Satan's] slaves that should endure when all their purposes were made void; a land defiled, diseased beyond all healing - unless the Great Sea should enter in and wash it with oblivion." The Lord of the Rings, Book IV, Chapter II.

As I see it, the only hope is for an invasion from Eternal Russia. Come and liberate us with the Gospel! Come, come, with fury and righteous anger to smite the head of the snake! Send out bishops, priests, and monks as an holy army for our deliverance! Come, Holy Rus!
Posted by Patrick Sheridan at 9:20 pm
Email ThisBlogThis!Share to TwitterShare to FacebookShare to Pinterest