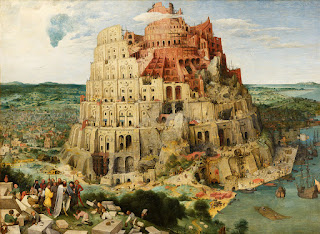 Who needs a tower when a ballistic machine can project you higher?

I refer you to the comments on my post "Come Josephine" (it's a catchy tune, isn't it? Just like all those German hymns penned by the Reformers to spread their doctrine...). I'd be very interested to know what anybody else thinks about aviation.

Recently I have been thinking a lot about the tower of Babel, and other stories of civilisations "going backwards," or forwards...the distinction is in kind not in principle. Pride seems to be the binding tenet of these stories. Man becomes inflated with his own self, his wisdom, his greatness, his empire or lineage and casts true religion aside. True to scripture ("Pride goeth before destruction, and an haughty spirit before a fall," Proverbs 16:18), he falls. For the Númenóreans, their pride and blasphemy caused the destruction of their antient home and the permanent change of the world. For the people of Babel, their tongues were confused and they were scattered. For us, under the yoke of hedonist and liberal principles, our curse seems to be in reverse of Babel. Where they were scattered, we seem bent on bringing the world to our shores into one people (the irony, of course, and something known well to the reprobate architects of our demise, is that this is impossible socially, culturally and linguistically). Where their tongues merely became confused, our language is, for a people once grounded in the Eternal Word, bastardised, sucked dry of meaning, subject to perpetual change, and usurped by obscene lobbyists thundering for equal pay, equal rights, equal marriage, levelling all distinctions, obliterating all differences. And I put it to you, dear readers, that one of the tokens of this decline from man to beast (thank you Darwin), from Christendom to Europe (thank you...gracious, there are so many) is the flying machine. Mark my words! We will have to pay for our hubris one day.
Posted by Patrick Sheridan at 8:05 pm
Email ThisBlogThis!Share to TwitterShare to FacebookShare to Pinterest