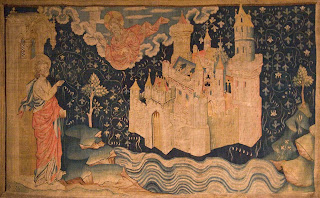 It seems that amidst losing his temper with desperate saps in his celebrity cult and presiding over tawdry evening masses in the new world, pope Francis has the temerity to pontificate about whether people who build walls rather than bridges are Christian or not, while conspicuously having nothing to say about a more dangerous woman who advocates the murder of children. Now, before we all swoon at the pope's accustomed wisdom, let's take a look at the Scriptures, shall we?


"And he carried me away in the spirit to a great and high mountain, and shewed me that great city, the holy Jerusalem, descending out of heaven from God, Having the glory of God: and her light was like unto a stone most precious, even like a jasper stone, clear as crystal; And had a wall great and high, and had twelve gates, and at the gates twelve angels, and names written thereon, which are the names of the twelve tribes of the children of Israel: On the east three gates; on the north three gates; on the south three gates; and on the west three gates. And the wall of the city had twelve foundations, and in them the names of the twelve apostles of the Lamb." Revelation 21:10-14.

Ever heard of the "pearly gates?" But there's more. Isn't the Vatican City entirely surrounded by walls? Pretty thick ones too! Monasteries have walls. Prisons have walls to keep dangerous people contained. Does the pope think they should be thrown down? The Chinese built a famous wall to keep out barbarian hordes. Hadrian's wall marked the boundary of Roman hegemony in Britain. In the palmy days when the Index of Forbidden Books was regularly updated, one could reasonably describe that as a kind of metaphorical "wall" to stem subversive ideas. Heavens! The Roman church had a siege mentality in the period between the unification of Italy and the signing of the Lateran Treaty! When the Church is driven into new catacombs (we aren't far from that), the remnant might be glad of a protective wall. And so on.

It seems to this old and cynical young man that building walls is more natural for a Christian than building so many bridges; particularly for the benefit of people who aren't interested in reaching back to you, or sharing your culture, language and traditions, and are actually more interested in harming you, raping your wives and daughters, murdering your sons, and depleting your economy, social benefits and natural resources.

Does this man's arrogance know no limits? Perhaps pope Francis, the most European pope to date, doesn't care much for national sovereignty because he is king of the Vatican City, which is pretty much a non-country? Or does he just have verbal diarrhoea? In any case, I'm sure we can expect many more pearls in the future.
Posted by Patrick Sheridan at 11:59 am
Email ThisBlogThis!Share to TwitterShare to FacebookShare to Pinterest