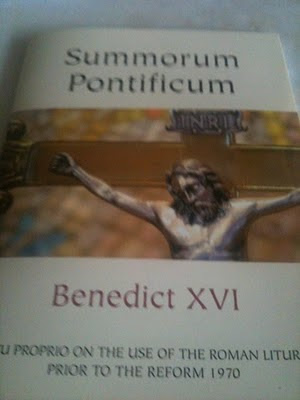 Sorry, I just can't get that Bananarama song out of my head (thanks to a makeup advert by Boots)...


As little as two years ago I could not conceive of ever leaving the Roman Church, for all her demonstrable want of Liturgy, the tacky culture and ill-informed pieties and all that. But I thought that all this lived alongside the hallowed, the ancient, the venerable and the lofty; that as Sam looked up out of the shadows of Mordor and descried a lonely star, I imagined that the darkness was only a passing thing, and that the Sacred Liturgy was high and beautiful forever beyond the reach of ''Bugninis'' - Bugnini was but a servant or emissary - that for the long defeat of the Traditionalist cause, salvation lay at the end, however dim this hope might be. Of course I was bewildered and deluded. In the six years or so that I have experienced RC ''Traditionalism'' I have come irrevocably to the conclusion that Tradition (understood as something independant of the reigning Pope) is...to be blunt...stone dead in the Roman Church, and that traditionalists are part of this problem. I have given up trying. I am going now to try and live life to the full as a Catholic without having to perpetually sacrifice my catholicity (and fundamentally, my conscience) upon the altar of obedience to the Papal system.


I always believed that communion with the Apostolic See, and the bishops thereof, was a necessary mark of one's catholicity; that the bishop of Rome guaranteed Catholicism, orthodoxy and godliness, and that this was a universal given in the history of the Church, but rejected by the Orthodox and the Protestant Reformers. This may have had at least the semblance of truth at some point in the deeps of Time, but I fail to see how this works nowadays. How can you look to Mother Rome when Mother Rome continually eschews her own Tradition? My personal understanding of Tradition is that the older a particular tradition, custom, law or whatever can be proved to be, the greater auctoritas it carries - and subsequent laws are less. So which is more catholic in the universal sense of obedience to the Tradition of the holy fathers? For Ministers in an Anglican church to use folded chasubles during Lent? Or for Roman Ministers to wear Dalmatics and Tunicles? Again, which is more catholic? For the Celebrant of Mass in an Anglican church to administer the Sacrament under both kinds? Or a Roman Celebrant to do so under one kind only? Christ's ordinance is quite clear on this matter. These are two simple examples, and I could have chosen from a host of others, not just from the Church of England. There are many ways that churches in schism with Rome are more catholic than the Roman Communion. Several friends of mine, at variance with Rome, pray the pre-1911 Roman Office with the pre-Urban VIII hymns. This is more than can be said of RC Traditionalists! As for me, on Sundays and feasts I have taken to reciting Mattins and Evensong according to the Book of Common Prayer (until I can locate and afford a pre-Peasant Breviary that is, and this is much better than bothering with the 1961 Breviary as it is!). 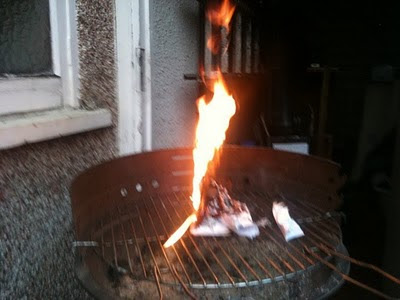 It just seems to me that if I am to remain Catholic, I cannot do so in conscience anymore in the Roman Church. My connexion to the Roman Church has, of late, been little more than a cultural attachment to the city of Rome (as a classicist); her ancientry, and the memory of her ancient orthodoxy. Even as a Traditionalist I didn't take modern(ist) Rome that seriously anyway. St Bede, the father of English history, had a natural affection for the Roman Church and followed the Roman Liturgy of an ancient kind not because it was imposed upon him by the Pope as Pius V, Pius X and Pius XII had done, but because the ancient Roman Liturgy expressed the orthodox Catholic faith of the Church. The Liturgy celebrated in Rome, as the photos in Grey as ash demonstrate, is neither orthodox nor catholic in any meaningful sense, and liturgical legislation in the Roman Church in the last century (especially in the last four years) indicates that Rome is in a state of de facto schism with her own Liturgy; and the fact that Traditionalists welcome this legislation worries me considerably. 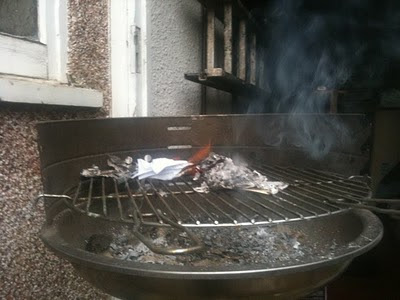 In token of this, on Saturday afternoon I prayed the Gradual Psalms (the obligation to recite them privately having been removed by Pius V, in Quire by Pius X) and then burned my copy of Summorum Pontificum. This is a new start for me, and the eschewing of ecclesiastical despotism for a more authentic attachment to the Catholic Church. I do not plan on joining either this or that church any time soon. This is a time of searching for me, and intensive prayer. Pray for me that I may come into that Church which is most pleasing to Almighty God.