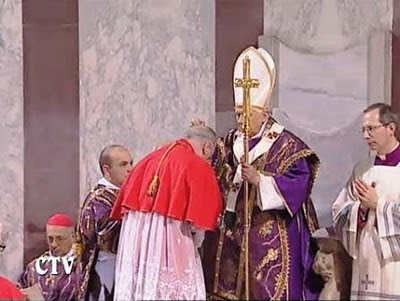 I am getting worried about Ash Wednesday. Since I took my ''Oath against '62,'' I have kept away from such liturgical abuses as Mass facing the people, evening Mass etc, which means that I have nowhere to go on Ash Wednesday. I shall be working in the morning, and even were I not working my guess is that only a ''private'' Mass at some ungodly hour would be on offer within 20 miles of my house. I wonder...since the liturgical day starts at sunset with the Evensong of the Church, does this mean that Traditionalists will be providing Liturgy after Vespers on Tuesday evening? Technically the evening of Ash Wednesday is the next liturgical day...
What do I do? I believe that the imposition of Ashes is a necessary part of one's preparation for the great Lenten fast (as the Hobbits Merry and Pippin believed that eating was a necessary part of breakfast). Do I burn my own Palms (which I kept from last year) and mark my own forehead before work (I wonder if my father keeps the necessary stuff in his shed?), reciting a paraphrase of the formula changing the verb forms? Surely before 1953 the Church got by without evening Mass? Or are we stuck with this liturgical abuse for ever and ever and ever until Tradition has been beaten down so low that none can foresee it's getting up again while this world lasts? The absolute worst thing you can do liturgically is face the wrong way...right next to this is to celebrate at a canonically inappropriate hour. Or does the Pope now have the authority to manipulate the lights of the firmament so that the Eucharistic Sacrifice is now sundered from the liturgical order of the day?
Evening Mass is an abomination. Anyone who disagrees with me is mentally sick and should be shot.
The above photo shows Papal Ash Wednesday last year, praised by certain people of unsound liturgical disposition (you know the sort - dress a pig up in a Roman cut chasuble and a lace alb, and behold! you have mutual enrichment, or reform of the reform, or the Benedictine Altar arrangement or some shite in evidence) as a return to the Traditional Liturgy, or something similar. Boob. If you look, not even very closely, you'll see that the Cardinals are wearing scarlet choir dress, and the assistant Deacons are wearing Dalmatics. Hmmmm...I was under the impression that the traditional choir dress of a Cardinal between Septuagesima and the Paschal Vigil was not scarlet, but penitential violet, and perhaps more fundamentally that the Ministers of the Mass wore Folded Chasubles on Ash Wednesday. Call me dim-witted, but...where does Tradition come into all of this? The short answer is, it doesn't. It just boils down to a bunch of idiots dressing up.
Posted by Patrick Sheridan at 9:21 pm
Email ThisBlogThis!Share to TwitterShare to FacebookShare to Pinterest