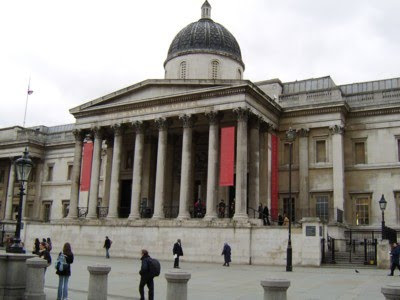 I have three other posts in embryonic form at the moment, but I seriously cannot be bothered to finish them. So an account of a Rome-less day out seems apposite.
This afternoon I met up with a very old friend of mine, an atheist in fact who described me as a ''freelance Christian'' (after I told him about going to different churches to experience different Liturgy - but keeping very distant from '62, naturally). We had lunch at Garfunkel's on the Strand, a few pints of passable ale in a nearby pub, went into a dingy church (which I warned him about), wandered around Covent Garden and the National Gallery (discussing Art history - we discussed politics before the Wilton Diptych), and then concluded the day with Choral Evensong at Westminster Abbey - not at their best I must say, the Anthem (by Bach) was pretty crap actually, though the plainsong psalmody was rather good. We had planned on returning to that dingy church, but I had left my No Popery placard at home. All in all a decent way to have spent an otherwise miserable day. Funnily enough, I was telling him about Traditionalists over lunch and dropped my knife, to which he said: ''They must really piss you off Patrick, you're throwing knives!''
He has read this blog occasionally, and found it interesting, noting that my interest in Liturgy was ''purely'' intellectual. He asked about that photo, you know the one with the row of private Masses? Was it the way they were standing? he asked. I explained my objections, and he aptly said that it seemed an awful ''waste of ecclesiastical resources'', or words to that effect (how strange that I agree more with an atheist about matters liturgical than I ever could with a Trad Catholic!). I objected to his saying that my interest was ''purely'' intellectual. I explained that the study of authentic Liturgy is indeed intellectually stimulating, but there were moral dimensions also. Moral and liturgical purity interpenetrate, in my opinion - that the study, celebration and safeguarding of authentic Traditional Liturgy is not only a worthy intellectual endeavour, but a moral activity, veritably conduct of the highest order. The study of authentic Liturgy is study of Tradition, God's writ for our lives and sanctification. The celebration of authentic Liturgy is the celebration of Tradition. The safeguarding of authentic Christian Liturgy is to safeguard the Divine deposit of Faith, and is therefore the duty of all Christian men - regardless of one's mixed loyalties to magisterial ruling. I wonder if Traditionalists who celebrate the '62 liturgy come away feeling that they've actually done something worthwhile, or measurable in the safeguarding of Tradition? In all honesty, when I came to realize what '62 was (and is not), I had quite the opposite feeling; almost that feeling one gets when one has let somebody down.
In case any of my Facebook friends are reading this, I wore a navy twill suit, black semi-brogues, navy overcoat and pink cashmere scarf. Someone said that it is always best to meet someone after a long sundering in clothing which gives off the impression that you are more successful than you are in reality. I hope I didn't overdo it...
Posted by Patrick Sheridan at 11:16 pm
Email ThisBlogThis!Share to TwitterShare to FacebookShare to Pinterest