The cats of Queen Berúthiel... 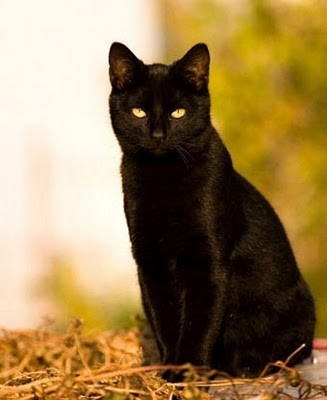 When Gandalf led the company of the Ring into the long dark of Moria, Aragorn reassured the Hobbits with these words:
''He is surer of finding the way home in a blind night than the cats of Queen Berúthiel.'' (The Lord of the Rings, Book II, Chapter IV).
What an odd thing to say! Berúthiel was the queen consort, loveless, solitary and nefarious, of Tarannon, the twelfth King of Gondor (T.A 830-913), the first of the ''Ship-kings'', who took the crown in the name of Falastur, Lord of Coasts, and was the first childless king. Berúthiel hated everything, as all men hated her, all colours and the Sea, and preferred to wear black only, to live in bare chambers, and the king's palace in Osgiliath was filled with sculptures, beautiful of shape and yet hideous, beneath cypresses and yew trees. She had nine black cats, and one white (her slaves), with whom she conversed (or read their minds), setting them to discover all the secrets in the realm, so that she knew all manner of things men were wont to keep hidden, setting her cats to spy upon men, and tormenting them. No man in Gondor dared touch them, and if they saw the cats pass, they cursed. Her name was erased from the Book of the Kings, and it is said that Tarannon had her set in a ship alone with her cats and set adrift in the sea before a wind from the North.
Probably before coming up with this idea, Tolkien told Daphne Castell in an interview in November of 1966:
''Berúthiel...I don't really know anything about her...She just popped up, and obviously called for attention, but I don't really know anything certain about her; though oddly enough I have a notion that she was the wife of one of the ship-kings of Pelargir. She loathed the smell of the sea, and fish, and the gulls. Rather like Skadi the giantess who came to the gods in Valhalla, demanding a recompense for the accidental death of her father. She wanted a husband. The gods all lined up behind a curtain, and she selected the pair of feet that appealed to her most. She thought she'd got Baldur, the beautiful god, but it turned out to be Njord the sea-god, and after she'd married him she got absolutely fed up with the sea-side life, and the gulls kept her awake, and finally she went back to live in Jötunheim.
''Well, Berúthiel went back to live in the inland city, and went to bad (or returned to it - she was a black Númenórean in origin, I guess). She was one of these people who loathe cats, but cats will jump on them and follow them about - you know how sometimes they pursue people who hate them?...I'm afraid she took to tormenting them for amusement, but she kept some and used them - trained them to go on evil errands by night, to spy on her enemies or terrify them.''
Unfortunately there are many foul sorceresses about, and I expect that a lot of these...oh no, that's too evil...! There's a passage in Tolkien for everyone!
Posted by Patrick Sheridan at 4:02 pm
Email ThisBlogThis!Share to TwitterShare to FacebookShare to Pinterest