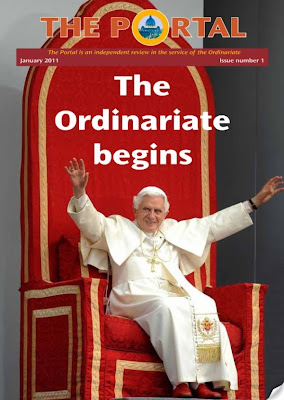 One thing I don't quite understand about this Ordinariate business is the idea, fondly supposed by the Roman Church and by the Traddies who go along with everything that church dictates, that the former Anglicans received into the Ordinariate will somehow enrich the liturgical patrimony of the contemporary Roman Church by some miraculous infusion of ''patrimony'' or the superb choral tradition of the Church of England, or something - akin, in the minds of some, to the reconciliation of the SSPX; a genius ploy of the ''Pope of Christian Unity'' (who is clearly a liturgical expert) to put an end to communion in the hand and such things. The Romans seem to think that the Ordinariate is a means whereby the Anglo-Catholics can come into the Roman Church, and be genuine Roman Catholics, and yet retain their unique Anglican identity and traditions.

Am I missing something here? I had thought that it was the almost universal praxis of contemporary Anglo-Catholics to celebrate the Novus Ordo of Paul VI, in English, which is exactly the sort of rubbish the Traddies are desperate to extricate themselves from! It may be the case with some in the Roman Church that they celebrate the Novus Ordo because they feel constrained to do so, but would rather not. With most it's because they know nothing else; with some, it is because they are Modernists; others because of some sense of Ultramontanism. Is the Novus Ordo something worthwhile in the Anglican liturgical patrimony? Is it in the Anglican liturgical patrimony at all? Or are the sort of Anglicans received into the Roman Church just like Modernist Romans? Rome is omniscient and benevolent, and what Rome does today (even if it is untraditional and aliturgical) is to be emulated by everyone, everywhere. Did the Traddies seriously think that the Anglo-Papists used the English Missal or the Prayerbook? They aren't all like the eminent Fr Hunwicke! If not, to what purpose is the Ordinariate? Why don't the Anglicans just convert en masse like they did 18 years ago?

I am supremely confident that the Ordinariate will fail. I don't wish anyone who has gone over to Rome ill. On the contrary I wish them well, and every blessing in the Lord; but they'll be back! The sort of artificial Anglican-style liturgy designed by Rome for the Ordinariate will be to nobody's taste, and nobody likes being dictated to by the Pope, about how to celebrate Liturgy, what to believe etc. Or maybe it will be the culture, or the people? What does the Pope know about the traditions of the Church of England? If the Traddies think that the new Anglo-Catholics will make their liturgical crisis magically go away (like the SSPX and other Traditionalist groups, who simply perpetuate Ultramontanism by their deluded adherence to the '62 Rite), they are sorely mistaken. If the Anglo-Catholics think that the astroturf is greener on the other side of the Tiber, they too are sorely mistaken. Lord grant that all concerned wise up and shake off the Ultramontane heresy. Rome is not home; Rome is an abode of dragons.
Posted by Patrick Sheridan at 3:07 pm
Email ThisBlogThis!Share to TwitterShare to FacebookShare to Pinterest