Pedantry and the Romish vice... 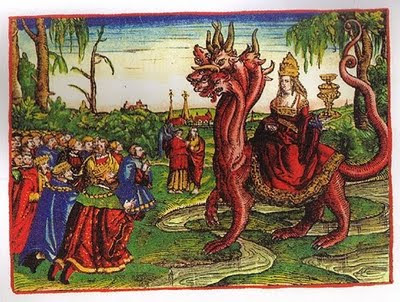 When I was at school my Music teacher told my parents at a parents' evening that I was ''bossy'' and had a tendency to correct people overmuch. Well I think that people deserve to be put in their place sometimes, especially when they go about spouting clichés and parroting nonsense thrust down their throats by Rome - such as this man. If I see the new ICEL described as the ''new, corrected'' translation again I shall boil over! Obstinate, deluded fools! How is it correct to render ''et cum spiritu tuo'' as ''and with your spirit''? The personal pronouns Tuus and Vos, in Latin, mean ''thou'' and ''you'' in English, singular and plural, and in English serve also to express two different modes of familiarity. Remember the Thieves' Quarrel? The principle applies also to the Collects, the Eucharistic prayers and other prayers directed in the sight of God. There is something inherently distasteful about addressing God as ''you,'' and this has nothing to do with the parameters set by courtesy among Men. We address God in the singular because He is One God. The new ICEL, given us by omniscient Mother Rome, threatens and undermines this because they want a translation which stifles the English language; at once Bible-in-basic-English (a concept which destroys the love of English among Englishmen) and artificial - well it can't be said to be ''sacred'' or ''lofty'' in any way can it? Do these people (the Traddies) not realise that there are some of us, on the ''right'' of the spectrum, who do not welcome this new translation, and for very good reasons? The difference between us is that we would sooner give the task of translation to somebody like Tolkien, a master of tongues, or Wilde than some sycophantic pen pusher in the Magisterium.

Oh why do I even care? Rome is welcome to its new translations, its pathetic 1962 missals with grafted in New Rite lectionaries and other fudged liturgies in their relativistic, Big Brother (pope and magisterium) stew. It has nothing to do with me.

But it does have something to do with Fr Hunwicke. Poor Fr Hunwicke. Why does he not realise that 43 years of priesthood in the Church of England means nothing to anyone in Rome? According to Rome his Orders are null and utterly void. His scholarship is equally worthless to Rome. To Rome he is just like 24 year old Deacon Joe about to be ordained priest at Wonersh or Allen Hall. Nobody is anyone in Rome, unless you're Cardinal Secretary of some congregation in the Curia. Obedience and self-abasement are all that matters, love and obedience of the Holy Father at whatsoever cost (even conscience), even the cost of obedience to the ancestral Tradition of the ancient Church of Rome. You must love and obey the Holy Father, for he has the keys of the Kingdom. You must love and obey the Successor of St Peter...My God, the more I think about this the more I am reminded of Nineteen Eighty-Four, and the likely possibility that the Roman Church is not a church at all, but a mock-church with its head, in scarlet and white, riding upon a seven-headed beast and drunk on the blood of the Martyrs. God help the innocent Romans ground under that abominable system!
Posted by Patrick Sheridan at 12:54 pm
Email ThisBlogThis!Share to TwitterShare to FacebookShare to Pinterest