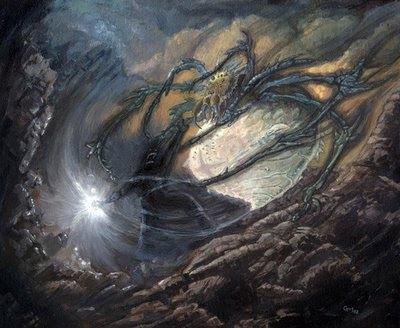 Meanwhile, it is told, Morgoth escaping from the pursuit of the Valar came to the wastes of Araman. This land lay northward between the Mountains of the Pelóri and the Great Sea, as Avathar lay to the south. But Araman was a wider land, and between the shores and the mountains were long and dreary plains without hindrance to passage, but bleak, and ever colder as the Ice drew nearer.

Through this dim land Morgoth and Ungoliant passed in haste, and so through the great mists of Oiomúrë came to the Helkaraxë, where the strait between Araman and Middle-earth was filled with grinding ice; and they crossed over and came back at last to the North of the Outer World. Together they went on, for Morgoth could not elude Ungoliant, and her cloud was still about him, and all her eyes were upon him. But when they had come to that region that was after called Lammoth, north of the Firth of Drengist, Morgoth grew more hopeful, for they were drawing near to the ruins of Angband where his great western stronghold had been. But Ungoliant perceived his mood and guessed that he would soon try to escape and defraud her, if he could. Therefore she stayed him, and demanded that he should now fulfill his promise.

''What wouldst thou have more?'' said Morgoth. ''All the world for thy belly? I did not vow to give thee that. I am its Lord.''

''Not so much,'' said she. ''But there was a great treasury, of which you said naught to me, and would have said naught even now, if I had not watched you. I will have all that. Yea, with both hands you shall give it!''

''Thou hast had the half already,'' said Morgoth. For when she was with him (against his will) at the sack of Formenos, he had let her feast awhile upon the gems of Fëanor, so that she should not come to the chamber of iron.

Then perforce Morgoth surrendered to her the gems that he bore with him, one by one and grudgingly; and she devoured them, and their beauty perished from the world. Then her strength was renewed, but her lust unsated.

In his right hand Morgoth held close the Silmarils that he had taken from the chamber of iron; and though they were locked in a crystal casket, they had begun to burn him, and his hand was clenched in pain. But he would not open it. ''Nay!'' he said. ''These things thou shalt not have, nor see. I name them unto myself for ever. Thou hast had already more than thy due. For with my power that I put into thee thy work was accomplished. I need the no more. Go, filth! Gnaw thy lust in some hold far away, or I will put a fire in thy maw that shall burn thee for ever!''

But Ungoliant was not daunted. She had grown great, and he less by the power that had gone out of him. Now she rose against him, and her cloud closed about him, and she cast upon him a hideous web of clinging thongs to strangle him. Then Morgoth sent forth a terrible cry that echoed in the mountains. Therefore that region was called Lammoth, for the echoes of his voice dwelt there ever after, so that any who cried aloud in that land awoke them, and all the waste between the hills and the sea was filled with a clamour as of voices in anguish.

But the cry of Morgoth in that hour was the greatest and most dreadful that was ever heard in the northern world: the mountains shook, and the earth trembled, and rocks were riven asunder. Deep in forgotten places that cry was heard. Far beneath the halls of Angband, in vaults to which the Valar in the haste of their assault had not descended, the Balrogs lurked still, awaiting the return of their lord. Swiftly they arose, and they passed with winged speed over Hithlum, and they came to Lammoth as a tempest of fire.

Then Ungoliant quailed, and she turned to flight, belching black vapours to cover her; but the Balrogs pursued her with whips of flame into the Mountains of Shadow, until Morgoth recalled them. Then her webs were shorn asunder, and Morgoth was released, and returned to Angband.

But Ungoliant went into Beleriand, and there dwelt for a time beneath Eyrd Orgoroth, in the dark valley that was after called Nan Dungortheb because of the horror that she bred there. But when she had healed her hurts as best she could, and had spawned there a foul brood, she passed away. For there were other evil creatures of spider-form that had dwelt there since the days of the delving of Angband; and she mated with them and devoured them. But whither she went after no tale tells. It is said that she ended long ago, when in her uttermost famine she devoured herself at last.

Thus ended the Thieves' Quarrel; and the fear of Yavanna that the Silmarils would be swallowed up and fall into nothingness did not come to pass. But they remained in the power of Morgoth.
Posted by Patrick Sheridan at 3:16 am
Email ThisBlogThis!Share to TwitterShare to FacebookShare to Pinterest