In the south of France... 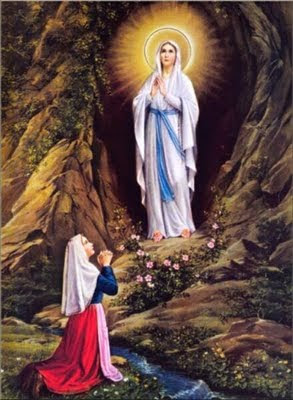 As you all know I repudiate that religious vice Protestantism (epitomised in the Ultramontane Papacy), but I can't shake off the feeling that Lourdes is a rather superstitious place, and therefore a magnet for superstitious people. I feel exactly the same way about Fatima; all those plastic crowns, dolls, dewy-eyed pious women etc. Show these people a pre-1911 Breviary and invite them to chant the Horae Minores, and they'd run for the hills!

Not that I wish to condemn or intrude upon anybody's piety. J.R.R Tolkien believed in the so-called ''miracles'' of the Lourdes shrine, and indeed wrote very movingly about them in 1944 to his son Christopher (illustrations from a sermon preached at St Gregory's on a rainy Sunday morning). I just think that there are more catholic and less Roman things to worry about. You want to know what I think really happened at Lourdes 150 years ago? I think that a poor simple peasant girl was exploited by her priest and the whole thing was a convenient set up. Of course if you want to believe in fairy tales, then by all means - there are pagans, witches and atheists out there, and of course ill-informed Romans. I'll just be saying my pre-1911 Office and worrying about things more real in the liturgical life of the Church.

Lourdes...I'm glad I never went, in spite of constant nagging from my Irish grandmother, who has been more times than I care to imagine. My grandfather, a more sober Roman in many respects (ex-Church of Ireland), put her rightly in her place once, and said: ''instead of going year after year, why don't you give the money to someone who has never been and perhaps can't afford to go?''
Posted by Patrick Sheridan at 2:46 pm
Email ThisBlogThis!Share to TwitterShare to FacebookShare to Pinterest