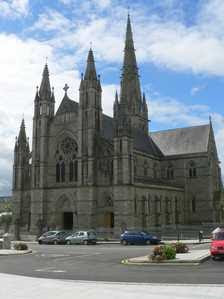 I must say I am delighted and amused that a regular reader of Liturgiae Causa comes from Letterkenny in Co. Donegal, on the north-west coast of Ireland. My grandparents live there. If he or she would care to comment and tell me what Liturgy is like there, I'd be grateful. I can't remember the parish church of Letterkenny very well. The last time I was in Ulster was in April of this year, though I went to Mass in Derry with my cousin - a rather traumatising experience - I would that I had gone to the local Church of Ireland church instead!

I think that if this were the end of the 19th century or around 1911 I'd have converted to the Church of England (or Ireland) gladly. I won't now, of course, since that church has deliberately abandoned the Catholic faith she once received from the Saints.

Posted by Patrick Sheridan at 11:14 pm
Email ThisBlogThis!Share to TwitterShare to FacebookShare to Pinterest