The problem of Rome... 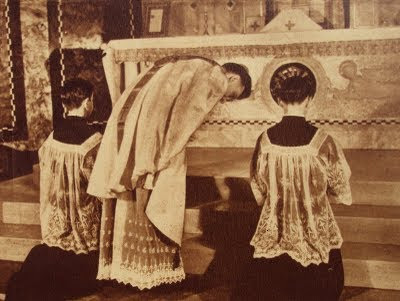 I am currently writing a post about the Franciscan Friars, the Paul III Breviary reform and the Tridentine Rite, but I am racking my brains trying to remember a quotation uttered by someone who may never have existed, and so the post won't be up for some time. Anyway, I was reading Essays on Ceremonial and came across this great quote by Dr John Wickham Legg instead. Naturally I agree with everything he says.


''The practical lesson which the study of these ancient customs teaches us is the caution which we should use in forming a judgement as to the source of the practices which some of us are old enough to remember in our youth. They are not all due to Puritan neglect, “the soft, easy, and comfortable pillow which ignorance and indifference make for a well-disposed head”; but many of them are part of the inheritance which has come down to us from our mediaeval forefathers. Sometimes we have suffered reproaches for belonging to a communion in which such slovenly practices could be found; just as we have been told that the Sundays after Trinity were brought in by Queen Elizabeth, instead of Sundays after Pentecost; whereas Trinity comes straight from the Sarum Missal, and may be found in many mediaeval German and French missals; and even to this day in the Dominican Breviary. Now the Middle Ages are thought to have been unrivalled in the dignity of their worship, and there is nothing to be ashamed of in customs which trace their lineage back to so noble a time. Indeed it is to the Middle Ages that the Prayerbook bids us look for our ecclesiology. It declares that “the chancels shall remain as they have done in times past,” that is, in the times which went before the edition of 1552. So that as a general rule we may take as safe guides mediaeval customs in ecclesiology, and also in ritual when not opposed to the present rubrics of the Prayerbook. Now the earlier ecclesiologists thought they might gain some knowledge of the customs of the Middle Ages by a study of modern Roman practices, receiving the assertion that Rome never alters with too confiding generosity; and accordingly they proceeded to change some of the inherited mediaeval customs in accordance with the dictates of modern Rome. But from modern Rome we can learn next to nothing of the practices of the Middle Ages. A very little study soon convinces us of the deep division there is between the practice of modern Rome and of mediaeval England, and that modern Rome will only lead us astray if we trust its liturgical decisions. Because a practice is Roman, it is not therefore of necessity good, or ancient, or Catholic.

''In the first place, the liturgy of modern Rome is the liturgy of the Franciscan Friars, while that of the national mediaeval Churches is the old Liturgy which was used in the parish churches of Rome before the days of Nicholas III. Theologians often tell us of the mischief which these Friars have caused in their science, and to philosophy; and the harm they have done in ecclesiology is certain. They are credited with the introduction of the Stations of the Cross, which even Mrs. Jameson can see set forth unworthy ideas. Further, how little of antiquity remains in practice in the Roman Communion may soon be gathered by those who will attend a few popular functions. Liturgical services, with the exception of the Mass, have well nigh disappeared; and the seasons of the Christian year, which we prize so much, are but little thought of. Lent has given way to the month of Joseph; Easter and Whitsuntide are swallowed up in the month of Mary and the Sacred Heart. A distinguished Fellow of the Royal Society told me that the only sign by which he now knew of the presence of Whitsuntide was the red colour of the vestments. If then the more conservative in the Roman Communion have been unable to save from the wreck the Breviary services and the Christian seasons, are they likely to have kept anything ancient in such comparatively unimportant things as the details of the ornamentation of the altar? They are rather likely to have been overwhelmed by the Oratorianism which, in the early days of the ecclesiological movement, was shown to be destructive of a scientific ecclesiology. As in Germany, in philosophy, the cry has been of late years Back to Kant, so in ecclesiology I am sure we must raise the cry of Back to Pugin, to the principles which Pugin advocated; we must throw away the worldly spirit of the Renaissance, and take our inspiration from the Middle Ages, remembering the direction of the Prayerbook that the chancels shall remain as in times past, and holding fast to a mediaeval liberty of practice as contrasted with the attempts of the Congregation of Rites to establish all over the world the iron uniformity which is the aspiration in most things of the nineteenth century. The end of this paper will have been attained if I should succeed in persuading some ecclesiologists that all that is Roman is not ancient, and all that is English is not Puritan.'' (Dr John Wickham Legg, Essays on Ceremonial, 1904).


I have used the image before. It's random but it adequately demonstrates my point. Traddies think this is ideal! It's hardly liturgical; liturgical would be Pontifical Sarum liturgy in a Mediaeval English cathedral church. Which reminds me...Assumption Day is coming up. Does anybody know a church (any church) which will be shewing some semblance of liturgical orthodoxy on that day of days? Those of you who will be sucking up to Anti-Christ Pacelli and his truly abominable propers will of course be feeling my blast. You have been warned in advance...

Posted by Patrick Sheridan at 7:39 pm
Email ThisBlogThis!Share to TwitterShare to FacebookShare to Pinterest