What is the meaning of orthodoxy? 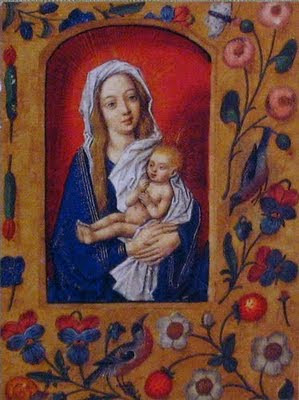 Those of you expecting a thorough treatise on the subject will be disappointed I'm afraid - I'm not bright enough for such work. I am reading The Banished Heart by Dr Geoffrey Hull, an excellent book if I may say so. I have only reached chapter II but already he has made some highly reasonable points (though I daresay I am disappointed that he cites Michael Davies in a serious context), some of which I have tried to address on this blog. One of them is the subject of liturgical versus doctrinal orthodoxy. Hull rightly observes that there is a tendency in the Roman Communion to regard orthodoxy as first and foremost moral and doctrinal correctness, submission to the teachings of the Magisterium, and that all other things (liturgical worship in particularly) are subordinate to this. I humbly observe that this seems to be a modern, and dangerous, misapprehension. Orthodoxia means ''right-glory'' as well as ''right-belief'' simultaneously, and so the solemn Liturgy of the Church is not the duty of the already ''doctrinally orthodox,'' who confess the teachings of the Church fortified by the Magisterium, but of all men alike who confess Christ. The rudiments of the Christian Liturgy were in place long before the Ecumenical Councils and pro-Life movements!


Rome is full of ''conservative'' Ultramontane types - you know the sort, they love to quote the documents of the Second Vatican Council, join the ''Faith Movement,'' and don't know the first thing about Liturgy (priests of this ilk don't wear the cassock in public but rather the Protestant-looking clerical suit). The ignoramus who wrote that article on homosexuality and the priesthood is even so. To be quite blunt I think these people are apostate from the Faith; at least ''ideologies'' (even if they are good) and Ultramontanism don't seem remotely Catholic to me. The only thing in their favour (to distinguish them from the average ''traditionalist'') is that they are more open-minded and ecumenical. Years ago I remember trying to remonstrate with one of them about why Mass facing the wrong way is a pernicious liturgical abuse (the absolute worst in my opinion), but she just wasn't interested. She is quite famous I think, but of the ''spirit of Vatican II'' generation; that is to say someone who is staunchly committed to the Novus Ordo of Paul VI and considers anybody who questions the latest decision of the Magisterium as a heretic. 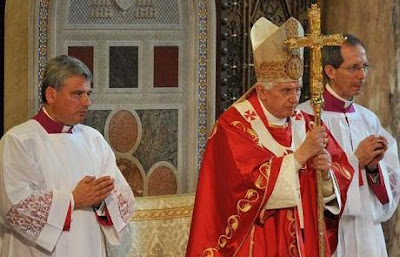 A scene from the Papal Mass in Westminster Cathedral last September - how our Anglican brethren put us to shame the day before! I noted how ridiculous and untraditional it was for the pope to come direct from the Sacristy in a chasuble and to celebrate versus populum in front of and behind a row of six candlesticks and a crucifix! And this was supposed to be better than the Missa de Angelis in Scotland? The Roman Church is a liturgical laughing stock...

But where does this mentality come from? Why does the Roman Communion consider intellectual assent to her teachings more important than the cultivation of liturgical orthodoxy? Christianity is fundamentally a worshipping community. Our ritual response to the sacramental activity of God in our lives is primary; doctrine comes second to that. In the encyclical letter Mediator Dei (1947) - infallible as Holy Writ to the Traddies - Pius XII reversed the ancient liturgical principle legem credendi statuat lex supplicandi; a matter of immense import in the liturgical life of that communion, and don't we feel the effects to this day? The fact that the present Pope fully supports the liturgical heterodoxy of his predecessors, in spite of Summorum Pontificum (which in reality renders tradition superfluous and a second-best thing anyway), is simply evidence that Rome's whole approach to the Sacred Liturgy is essentially flawed. The Novus Ordo with a kind of Baroque veneer is really traditional isn't it! When was the last time folded chasubles were used at a Papal Liturgy during Lent?

Why do ''doctrinally'' orthodox people who are indifferent to Liturgy exist? They seem to be a peculiarly Roman phenomenon. Are they orthodox in any meaningful sense at all? How can you be orthodox if you don't think that Liturgy is that important? Of course those of us who have eyes to pierce through the deceits of Rome and perceive at the heart of that system only the purpose to perpetually keep Tradition under the foot of the Pope (i.e, we liturgically orthodox) can just get on with Tradition as though the Counter Reformation never happened and endure the names of heretic and schismatic. What does it matter, on the Day of Judgement, if you never took part in a prayer vigil outside an Abortion clinic? Or you never attended some other neo-Conservative rally? If you couldn't be bothered in life to worship God as He wants to be worshipped then I'm sure His Judgement will be terrible, though I'll leave that to Him.

The image of Our Lady seems apposite. No doubt some of you will be celebrating the festival of the Assumption as an ''external solemnity'' today. I have no objection to external solemnities (sometimes they are pastorally expedient), so long as they are celebrated within the kalendrial Octave and not before the feast itself, which seems to be the tendency these days. Is it the nearest Sunday? Anyway, it is orthodox to confess that St Mary is the Mother of God, that she was sinless, that she was assumed into Heaven. Why is it orthodox? Because the Tradition of the Church, endued with ancient piety, says so. It was already the custom among pious folk to refer to St Mary in prayer and discourse as Theotokos long before this was an officially ''acceptable'' term (although it is a misconception that Ephesus ''defined'' St Mary as Theotokos - the fathers did no such thing). In 1950 Pius XII replaced the ancient proper prayers of the Mass and significantly changed the Office for the feast of the Assumption, to adorn it with a new dogma instead. Those traditionalists out there who confess the doctrine of the Assumption and yet use the Pacelli propers for the celebration of Mass are not orthodox, they are Ultramontane. The entire impetus to believe the doctrine was removed by Pius XII and replaced with Papal authority. To put it simply: Gaudeamus and the traditional Office have the witness of centuries of Tradition. Munificentissimus Deus and Signum Magnum undermine the very orthodoxy of the Assumption since they have nothing to do with St Mary.

Posted by Patrick Sheridan at 12:59 am
Email ThisBlogThis!Share to TwitterShare to FacebookShare to Pinterest