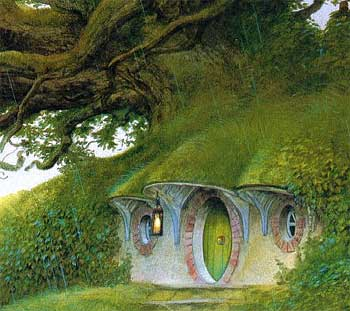 It was my birthday on the 16th March so I thought I might expound something of birthday customs among the hobbits of the Shire, especially significant as The Hobbit is approaching its 75th anniversary.

Those of you who have read The Lord of the Rings will know from all the fuss about Bilbo's long-expected birthday party that, in the Shire, birthdays had a considerable social importance. A person celebrating his or her birthday was called a byrding (from the Old English byrd, birth). Birthday customs in the Shire had, though deep-rooted, by Shire Year (SY) 1401 (the year of Bilbo's eleventy-first birthday), become so regulated by strict etiquette that they were, in a sense, reduced to mere formalities, as seen in Tolkien's explanation that birthday presents were not expensive, ''as a rule.'' When, in SY 1419, Gandalf narrated the history of the creature Gollum to Frodo in the morning of the Shire, it was said that Gollum's constant claim to the Ring of Power, notwithstanding demonic promptings from the Ring itself, came in part from the fact that it had come to him on his birthday, that it was his ''birthday present.'' That Gollum was of hobbit-kind (of the Stoor kindred of Wilderland in fact), that hobbits were very slow to change, and that Bilbo had given presents away on his own birthday, makes the two customs seen here seem at variance, or that there was an error in the text. Tolkien explains that the byrdings both gave and received presents, but that the processes were different in origin, function and etiquette. The reception of presents by the byrding (omitted from the text of The Lord of the Rings) was the older custom, and by extension of this fact, the custom more regulated by etiquette.

The receiving of presents was an ancient ritual connected with kinship. It was at once the formal recognition of the byrding's membership of a family or clan, and the commemoration of the same. Anciently this took place shortly after birth with the formal announcement if the byrding's name in the presence of the family, or clan, assembled, or in larger families (such as the Brandybucks of Buckland) to the titular ''head'' of the family. No present was given by the father or mother to the byrding on their birthday (except in rare cases of adoption); but the ''head'' of the family (generally the oldest living member) was expected to give something, if only in token. 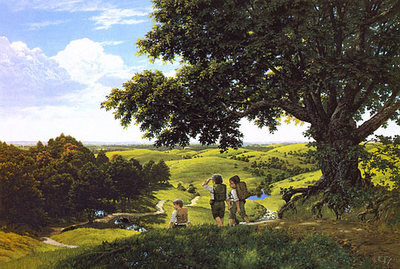 The giving of presents was a personal matter, not solely limited to kinship. It was a form of ''thanksgiving,'' and taken as a recognition of services, benefits and friendship shewn, especially in the past year. As soon as hobbits became faunts (that is walkers and talkers) they were expected to give of something they had ''produced'' (grown, found or made) or in their possession to their parents (in the case of small children, usually wild flowers). This may have been the origin of the custom of giving presents in wider distribution, and why it remained ''correct'' that the presents were previously owned or had been made/grown by the giver. Bilbo's gift of potatoes to his servant Hamfast Gamgee springs to mind.

By SY 1401, ''expectation of receiving'' was limited to second cousins and nearer kin who dwelt within twelve miles of the byrding. Even close friends were not expected to give presents, though they might, and usually did. This residence limit was obviously a recent result of the break-up of traditional kinship communities and dispersal of relatives, but according to Shire etiquette, the received birthday presents had to be delivered in person on the eve of the Day, or at least before nuncheon on the Day. They were, of course, received privately by the byrding, and it was very improper to exhibit them as a collection; a vulgar custom you sometimes find in modern day wedding receptions (and which would have horrified the Shirefolk). The giver could thus accomodate his present to his income, and could give of something heartfelt without incurring public comment. Naturally custom did not require anything expensive, ''as a rule,'' and hobbits were often flattered by unexpectedly good presents, as seen in old Rory Brandybuck's forgiveness of Bilbo's disappearance after finishing the first bottle of Old Winyards, left to him by Bilbo in thanks for much hospitality.

In ''primitive'' communities, such as those still living in the smials (or clans such as the Tooks), the byrding was expected to give something to the titular head of the family. This may have been the case with the expedition of Déagol and Sméagol. Sméagol was probably an orphan, and I don't suppose was accustomed to give anyone presents on his own birthday, save the tribute to his matriarch-grandmother. Fish, probably. 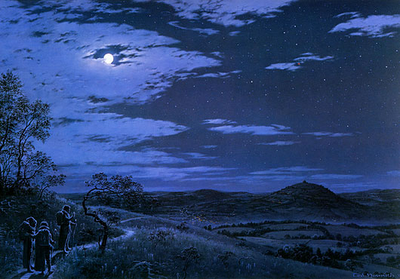 The giving of presents varied much from time to time, and from place to place, and depended on the byrding's social status and age. Wealthier hobbits gave presents to the members of their household, to their servants and to close neighbours and other kin (within the twelve mile residence). The withholding of a present was seen as a serious rebuke and a mark of extreme displeasure. Junior members of a house were under no obligations in the manner of giving gifts, though they usually did, according to their means and affections. Not expensive, as a rule, applied always and everywhere, although Bilbo was the obvious exception. His Party was a riot of generosity. Birthday parties were, of course, a very commonplace birthday custom. Them that were invited were given presents by the host, and they were expected anyway. Guests of the party did not bring presents with them, as this would have been very inappropriate. By the time of the party, the time for the giving of presents was past. If a guest could not come to the party, and was beloved of the byrding, a token invitation was sent anyway, with a present - usually consisting of food or drink, purporting to be a portion of the party fare.

I hope this has been interesting. Sources: The Letters of J.R.R Tolkien and Appendix C to The Lord of the Rings.

I couldn't find any images of hobbits, specifically hobbits celebrating a birthday, without using imagery of The Lord of the Rings film trilogy, so these general images of the Shire will have to do. Art: Ted Nasmith and John Howe.
Posted by Patrick Sheridan at 8:00 am
Email ThisBlogThis!Share to TwitterShare to FacebookShare to Pinterest