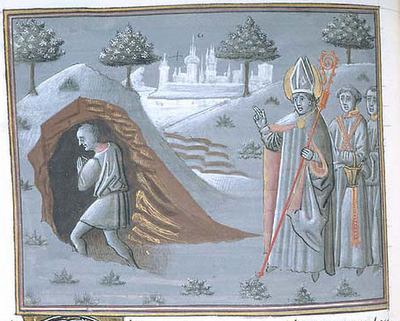 St Patrick, as depicted in a Book of Hours, ca. 1445. During the Middle Ages St Patrick was best known for his patronage of St Patrick's Purgatory in Co. Donegal. A brave pilgrim is seen entering the mouth of the cave, with the saint's blessing.

''I shall go, and turn again to my place, till ye fail, and seek my face. In their tribulation they shall rise early to me.'' Hosea 5:15.

''We entreat thee, O holy youth, that thou come back to Erin, and walk once more amongst us!'' So cried the children of Focluth, according to legend, to St Patrick in vision by the Irish Sea.

A very happy feast day to you all! St Patrick is, of course, my patron saint, the Apostle to the Irish and founder of the Church of Ireland. To me, St Patrick holds an especial place in my devotion, not just because of his unique apostolate to the Irish (my ancestors), who were brought into the fold of Christ even before the English, but also because of the steadfastness and long suffering of the Irish on account of the same faith, which they have since, alas, deliberately abandoned. Yet great wealth hath Eire of godly and righteous men! I try to distance myself from modern St Patrick's Day festivities, which typically involve dressing up like an idiot with green face paint, marching in parades with tricolour flags, and getting drunk; you know, idiocy which plays into the thick mick stereotype; although I remember fondly my first (and only) Mass in the Irish language at St Saviour's church in Lewisham in 1996, during my Irish dancing days. Tonight, however, I shall be at the Royal Opera House watching Alice in Wonderland, which I'm sure St Patrick would agree is far more civilised than dying the river green for the day. Dear God! 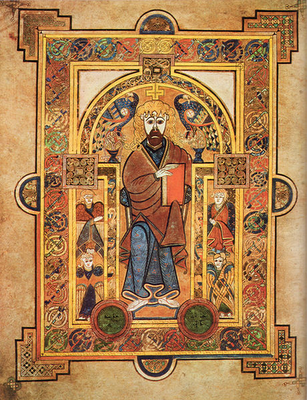 A leaf from the famous Book of Kells (ca. A.D 800) depicts Christ enthroned in Majesty; an example of the supreme contribution of the Church of Ireland to Europe.

St Patrick was born to Romano-British aristocrats (hence the name Patricius) in about A.D 373. There doesn't seem to be a general consensus as to where exactly he was born. The Catholic Encyclopaedia (which has a thorough and interesting account of his life) suggests Kilpatrick in Scotland; other sources say Cumbria; personally, I had always thought Wales. His father Calpurnius was a deacon, who held the rank of decurio in the Roman magistracy; his grandfather was a presbyter. At the age of 16, as the Roman Empire was beginning to wane in power and influence in Britain, and was undermined by endless political turmoil in Rome, St Patrick was captured by Irish raiders and sold into slavery, where he was a herdsman for six years in the service of a cruel master named Milchu in Co. Antrim, and, according to his Confessio, ''more and more did the love of God, and my fear of him and faith, increase.'' It came to pass one night that the Angel of the Lord came to him in a vision, telling him that the ship in which he was, by Divine ordinance, to flee, was ready, and he fled thence to Gaul, even to St Martin's monastery at Tours, where he was ordained to the sacred ministry by St Germanus of Auxerre, with whom in after days he went to Britain (at the behest of pope Celestine) to contend with the Pelagian heresy. It was here, according to the earliest Vita Patricii, that the voices of the children of Focluth came to him in vision on the shores of the Irish See. 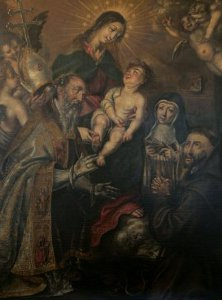 A 17th century Italian altarpiece, now in St Patrick's Cathedral in Dundalk, depicts St Patrick in the company of St Brigid of Kildare and St Francis of Assisi adoring St Mary and the Christ Child.

St Patrick returned to the hither lands in A.D 432, having been ordained bishop by St Maximus in Turin, with a small band of followers. It seems he went first to Antrim, to the land of his old master Milchu, to pay the price of ransom, and to impart his blessing. He established his see in Armagh, which has since been the centre of Christianity in Ireland, and the men of Ulster were first received into the Church. It was no small feat. Although he met with great success in Ulster and Tara, he was constantly in danger. Twelve times St Patrick and his followers were held captive by the druids, but when the Paschal Fire was kindled on the Hill of Tara at Easter Even 433, in the presence of the chieftains and the druids, it heralded the triumph of the Gospel. It is said that on the Hill of Tara St Patrick first plucked a shamrock from the greensward to expound to the men of darkness the doctrine of the Triune God, and so were they fortified in the True Faith.''For they themselves shew of us what manner of entering in we had unto you, and how ye turned to God from idols to serve the Living and True God.'' (1 Thessalonians 1:9). 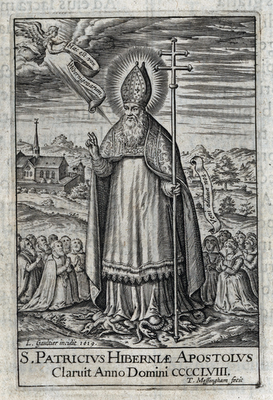 An illustration of St Patrick in the text of Messingham’s Florilegium Insulae Sanctorum was to prove influential in subsequent decades, providing the model for later coinage representing the saint.

You may believe myths about St Patrick at your whim; myths about driving serpents from Ireland, still more myths about a sort of apostolic commission to the Irish direct from the papacy after the manner of St Augustine, etc. I am of the opinion that myths about Irish saints (and they are many and fantastical!) are to be received not so much with a ''pinch of salt,'' as the saying goes, but on face value - that they are myths which have an inherent religious value, expressing truths about our faith which would otherwise go unexpressed. So spake Tolkien, who was very fond of Ireland (if not the Irish language), in his lecture On Fairy Stories. Many of them are just as wonderful and edifying as the old Norse sagas, or the Finnish Kalevala; I expect the most famous being the Voyage of St Brendan. As for serpents, St Bede writes in his Ecclesiastical History that: ''No reptile is found there [in Ireland], nor could a serpent survive; for although serpents have often been brought from Britain, as soon as the ship approaches land they are affected by the scent of the air and quickly perish. In fact almost everything that the island produces is efficacious against poison.'' As for the Papacy, neither St Patrick's Confessio nor his Epistola ad Coroticum make any mention of pope Celestine, but it is not unlikely that he received his pallium from Rome. Where the Celtic Church comes into that, who knows. St Bede wrote bitterly against the customs of the Celtic Church.

Sancta Patrici, ora pro nobis.
Posted by Patrick Sheridan at 8:00 am
Email ThisBlogThis!Share to TwitterShare to FacebookShare to Pinterest