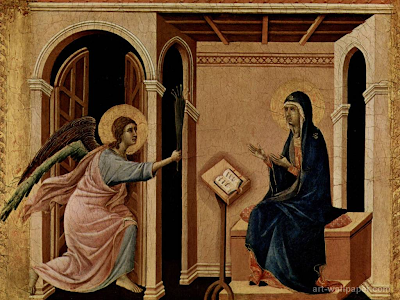 ''And God saw all the things which he had made, and they were full good. And the eventide and the morrowtide was made, the sixth day.'' Genesis 1:31.

''And the angel said to her, Dread thou not, Mary, for thou hast found grace with God. Lo! thou shalt conceive in the womb, and shalt bear a son, and thou shalt call his name Jesus.'' St Luke 1:30-31.

''But one of the soldiers, with a spear, pierced his side, and forthwith came thereout blood and water. And he that saw it bare record, and his record is true: and he knoweth that he saith true, that ye might believe. For these things were done that the Scriptures should be fulfilled, A bone of him shall not be broken. And again, another Scripture saith, They shall look on him whom they pierced.'' St John 19:34-37.

A very happy feast to you all, and indeed a Happy New Year! In Catholic England, until 1752, the new year, logically, started in the Spring of the Year nigh to the Equinox, upon the festival of St Mary's Annunciation.

My hero, J.R.R Tolkien, was a Catholic and a mediaevalist, and in the tradition of the Saxons it came to pass, by Divine ordinance, that the Dark Lord Sauron fell on 25th March. Quoth Gandalf:

''But in Gondor the New Year will always now begin upon the twenty-fifth of March when Sauron fell, and when you were brought out of the fire to the King.'' The Lord of the Rings, Book VI, Chapter IV. 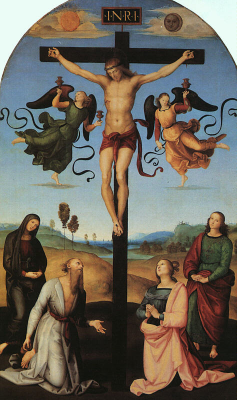 The Saxons believed, as indeed it was held in ancient tradition throughout mediaeval Europe, that Lady Day was also that solemn and serious Day upon which Our Lord was crucified, and the last day of Creation - a Day most holy, and encapsulating a treblefold mystery of our Redemption. All of this is asserted in Byrhtferth's Manual, written by Byrhtnerth, a monk of Ramsey, c. A.D 970-c.1020. Until the adoption of the Gregorian Kalendar in 1752, the 25th March was the beginning of the new year for most legal and official purposes in England, and a remnant of that still exists today, with the fiscal cycle. The Fellowship of the Ring departed from Rivendell on 25th December, and the realm of Sauron was ended on the 25th March. You see, it is not just in the Marian symbolism implicit in such persons as Elbereth and Galadriel, or Catholic teaching about death in the confusion of immortality with limitless serial longevity in the Athrabeth Finrod ah Andreth, or the symbolism of Aragorn as a new ''Holy Roman Emperor,'' in which we read aright the faith of the holy Fathers, but in the moral and religious significance of dates also. In other words, it is behoveful as Catholics to keep New Year on its right and proper day.

Roman Catholic Traditionalists, of course, with their typical rejection of anything old (or in this case, ancestrally Christian!), will continue to celebrate the new year on 1st January. God forbid that we remember anything which hath not its uttermost source in the pope!

Sancta Maria, ora pro nobis.
Posted by Patrick Sheridan at 8:00 am
Email ThisBlogThis!Share to TwitterShare to FacebookShare to Pinterest