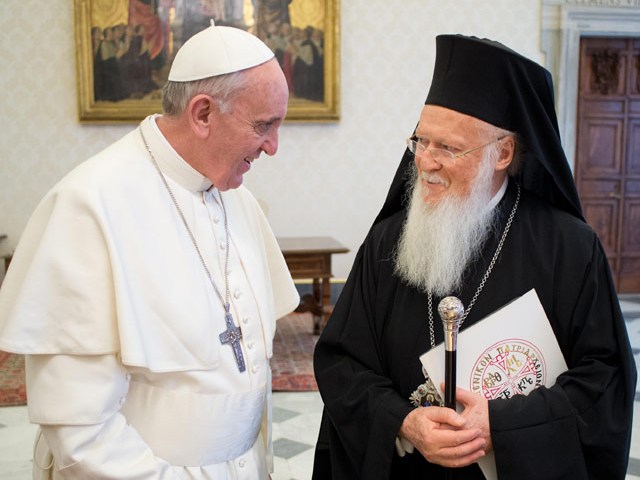 I never much liked Bartholomew. Constantinople needs another Photius, in my opinion.

They have since moved to the coast but years ago an elderly couple, Tony and Irene, lived two doors away at number 60. My parents called them "the Baptists" because they believed, rightly, in full baptismal immersion and, wrongly, in the sole efficacy of the Bible for Salvation. I work with a Baptist from Nigeria. The other day we were discussing Antichrist and I asked him whether he believed everything the Westminster Confession said about him, relative to the Papacy. He nodded but had some reservations. I enquired after these and he conceded that pope Francis is not the Man of Sin but that his successor will most likely match that description, coming with pride to mingle the Muslim and Jewish faiths into one false religion. I found this interpretation interesting, especially considering all the things the $$PX have said over the last 40 years about ecumenism and inter-religious dialogue.

We live in a heavily multi-cultural society, for good or ill...not personally subscribing to the modern notion of the equality of cultures, I should say ill. To illustrate the point, I believe the secularisation of supermarkets has its uttermost origins in non-Christian small shops opening their doors on Sundays. My mother told me that a Pakistani gentleman opened a shop in Londonderry in the 1970's and was eventually forced out because the locals didn't much care for his disregard for Christian values and boycotted his shop. On an ecclesiastical level, the influence of modern times is seen most clearly in the new stance of the Papal communion to ecumenism and inter-religious dialogue. If they believed that the Jews were faithless before, why do they not believe so now? If the Jews are Christ's enemies and a fallen religion, why does the Sacred Liturgy not reflect this? It seems to me that openness to other religions is a dangerous heresy. Who knows, it maybe that the next pope or some future pope not far away may be at the head of an endeavour to so water down the Christian faith as to make it indistinguishable from falsehood. Have they not done enough damage? On that note, I saw on BBC news that pope Francis has had his feet in both the Israeli and Palestinian camps on his tour of the Holy Land. And so the abominable symbiosis of these three faiths continues. It won't be long before the popes recognise Muhammad as a legitimate prophet! Already, Cardinal Ratzinger has said that Jews no longer need to convert to be saved! They just need to await the second coming of Christ, unlike the rest of us!

When I am old I doubt anyone will be at liberty to say black is black, the spade is a spade, the grass is green, etc without being tortured in some way. God, how I hate these times! Are modern technologies and conveniences the marks of civilised man? A society governed on true principles, however primitive, would seem far more civilised in my opinion. And so the True Church would preach against the faith and society of other religions as contrary to the Gospel! Sin is sin, truth is true, Christ is One. As I have said, there are no grey areas.
Posted by Patrick Sheridan at 9:00 am
Email ThisBlogThis!Share to TwitterShare to FacebookShare to Pinterest