Elle, Lucy's younger cousin, died this morning at about twenty minutes past nine of the clock. I had just arrived at work and received a very distressed call from my mother who was alone in the house with her. It appears that Elle had been unwell for some time. Our concerns were first raised over the bank holiday weekend. She was refusing to eat, found breathing difficult and was drinking water profusely. We took her to an out-of-hours emergency clinic where the veterinary surgeon took a blood sample. The vet noticed a high glucose level, indicative of Diabetes, and he recommended further tests. We took her home and made an appointment with our own veterinary practice where further tests were done. These confirmed the Diabetes and Cushing's Disease. Further tests were required but my mother, conscious of money and other things, wanted to arrange an appointment this morning with the vets to have the dog put to sleep. Last night Elle had disappeared into the bushes at the far back of the garden so as to die alone but my father had brought her back into the house. She was sleeping when I left for work this morning at 8 o'clock. My mother arranged the appointment but it was too late. It seems that as soon as she put the 'phone down the dog had passed to her long home. 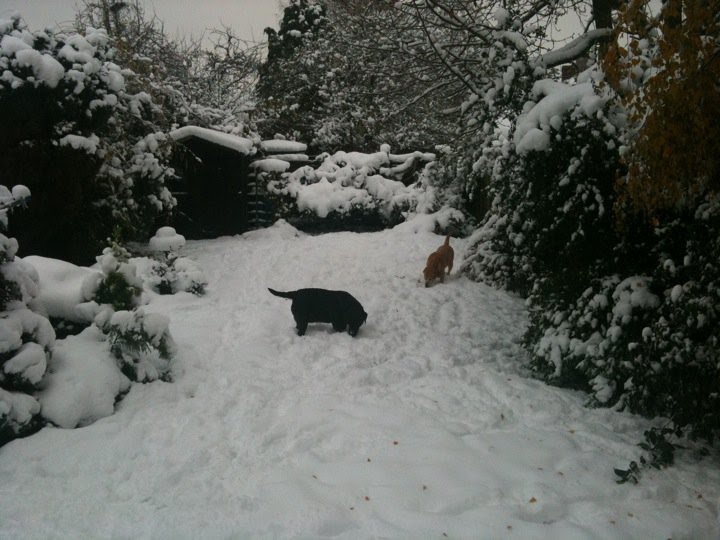 I lost all the photos of Elle when my phone crashed last year. Fortunately this one survived as I uploaded it to the blog. This was the feast of Candlemass in 2009. Lucy and Elle were excited by the snow that we had.


May she rest in peace.
Posted by Patrick Sheridan at 1:37 pm
Email ThisBlogThis!Share to TwitterShare to FacebookShare to Pinterest