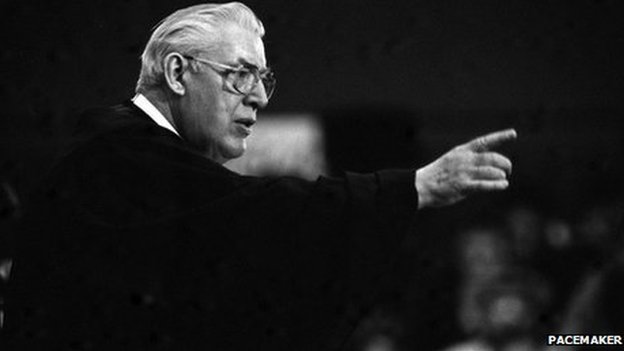 I first heard about Ian Paisley at about the time of the Good Friday Agreement, I think. I remember seeing him on BBC news marching along side David Trimble wearing the orange sash, marching to the sound of drums and whistles. My grandmother was indifferent, my mother none too fond, but I always secretly admired Dr Paisley. I thought it terribly brave, terribly foolish, terribly "traditional" for a man, in these latter days where truth is indistinguishable from falsehood, to stand up in publick and call the Romish pope the Antichrist. I was fascinated. Not that I cared for Paisley's erroneous Protestant beliefs and I am sorry that he sold out his political convictions in recent years. Still, it may be a blessing for one so enamoured of the Union to have died now. If the Scots secede from the United Kingdom then Northern Ireland may not be far behind, at least in terms of the waning years.

You may have despised him but you cannot doubt Dr Paisley's valour; that he remained staunch during many long years of doubt and trouble for Northern Ireland, that region of my own Irish family. He will be missed sorely by the Presbyterian community and by many loyal to the Crown. May he rest in peace.
Posted by Patrick Sheridan at 8:41 pm
Email ThisBlogThis!Share to TwitterShare to FacebookShare to Pinterest