Thoughts on the Sunday... 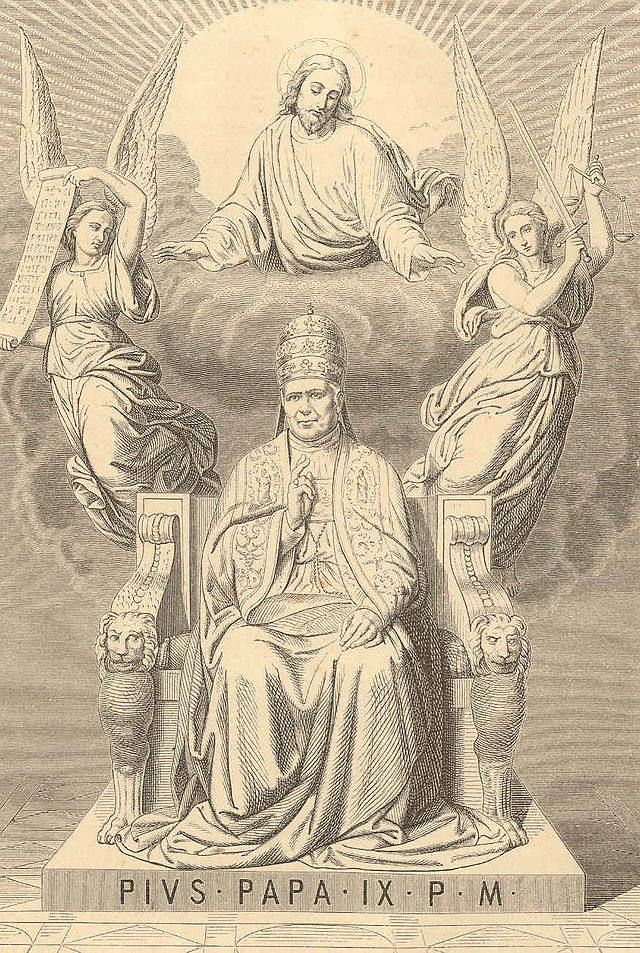 Have you ever thought about the "social kingship of Christ" in terms of the Prisoner of the Vatican? The cult of "Christ the King" was posited during an era of increasing faithlessness, much like the feast of Joe the Worker, so one might well question its value even for this reason alone. Why look to a devotion wholly shallow and alien to Tradition when the mystery of Christ's Kingship is best seen from a Rood on Good Friday or read in the Invitatory of Paschal Mattins? But there is another, more sinister, aspect to this cult. In mediaeval times, when the popes claimed feudal lordship over all the kings of Europe, they really were, in a sense, "king of the world." With the gradual loss of their secular influence during the Reformation and Counter Reformation periods, the Napoleonic Wars and finally the Unification of Italy, the popes sought ever to claw back their waning power by whatever means necessary. Then Pius IX, a complete megalomaniac, shews up; uses the French against his own people; loses; finds that his dominion is circumscribed to a space no bigger than Hyde Park; then summons an "Œcumenical Council" to proclaim himself incapable of the possibility of error! With sour grapes and the hubris of a defeated imperialist he confines himself to the Vatican, excommunicates the entire Italian peninsula and died bitter, a vast bloated bag of a man and despised by the people of Rome. Half a century later pope Pius XI proclaims a new doctrine with the encyclical Quas Primas on the "social kingship of Christ," in which he laments:

The right which the Church has from Christ himself, to teach mankind, to make laws, to govern peoples in all that pertains to their eternal salvation, that right was denied. Then gradually the religion of Christ came to be likened to false religions and to be placed ignominiously on the same level with them. It was then put under the power of the state and tolerated more or less at the whim of princes and rulers. Some men went even further, and wished to set up in the place of God's religion a natural religion consisting in some instinctive affection of the heart. There were even some nations who thought they could dispense with God, and that their religion should consist in impiety and the neglect of God. The rebellion of individuals and states against the authority of Christ has produced deplorable consequences. (24).

Which is but to say, "my right to teach mankind, to make laws, to govern...was denied; then gradually the religion of popery came to be seen as a false religion and was rejected." As I understand the tendency of popes, they themselves are the subject. The pope, then still Prisoner of the Vatican, can hardly posit himself as the subject of this new devotion. Who would take him seriously? Why not then become the high priest of a new cult and claim the kingship of men's lives? Thus did Sauron ensnare the King of Númenor and brought about the downfall of that realm! So do not trouble to ascribe this "social kingship" to Our Lord, whose Kingdom is not of this world, but to your master, the old man in white, who bides his time, secure in his pride and exalting himself in his pagan basilica in Rome.

And years ago I just thought the feast was tacky and modern!
Posted by Patrick Sheridan at 4:28 pm
Email ThisBlogThis!Share to TwitterShare to FacebookShare to Pinterest