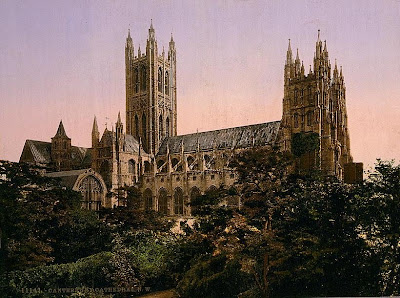 ...why do they despise the Church of England so much? Are they like me? Was their experience of the Church of England not to their liking, as mine was of the Roman Church? I can't personally see that going from Modernist in the Anglican Communion to Modernist in the Roman Church is necessarily an improvement. The most competent practitioners of Liturgy of my acquaintance are certainly not Romans! Romans may condemn Anglican Orders are null and utterly void but Roman Orders are equally invalid. Rome severed communion with the Catholic Church centuries ago. What incenses me is when this condemnation comes from pathetic Ultramontane types with no sense of tradition. Have you considered that some Anglo-Catholics don't want communion with Rome for very sound reasons? Rome is bent on absolute power and authority. Are there not bureaucrats even now in the Vatican bending the whole mind and purpose of the Scarlet Whore upon stretching the Ultramontane cancer to the uttermost corners of the earth? Rome will not be content until the world is under her thumb; not until all confessing Christians use their new translation (which clearly rivals the Coverdale Psalter), the Benedictine altar arrangement and the impoverished '62/'02 kalendar and Mass rubrics will Rome be content. And then her priests and suck-ups (aren't they in every parish? You know the sort, a woman who turns up 30 minutes before Mass to have a word with father...) will sap all sense of Tradition and orthopraxis from everyone and they'll all be mindless robots parroting devotional prayers at side altars, fulfilling their Sunday obligations by attending a New ICEL ''mass'' with hymns sung to Taize chants and having fasted for one hour before Communion. The Roman church is finished. Divine mercy chaplets and the New ICEL are the ultimate legacies of centuries of bad theology and Papal tampering with the Liturgy.

Or you can just sever communion with Rome, shake off the influence of any despot authority (misnamed ''apostolic''), and quietly get on with Tradition, pick up where Rome left off and be content. I have chosen even so. There's no use looking to Rome when Rome is full of idiots; Cardinals wearing scarlet during Lent, Deacons wearing dalmatics at Papal liturgies during penitential times, and advocates of sticking a row of candles on the Altar to re-orient liturgical worship to some faux-compass direction (which I am sure is in breach of the 2002 GIRM anyway). Some may argue that such things are not important in the great scheme of things. Maybe the colour of one's dalmatic is not that important when one is face-to-face with the Just Judge. But such things do mean that Rome has forgotten her own tradition, and is now making a ham-fisted effort to try and make it up again. How does a row of six candlesticks make an iota of difference to a clear liturgical abuse? The new translation is equally repugnant. You're either traditional, or you are not. You either face the right way in liturgical worship, or you face the wrong way. You're either in communion with the Catholic Tradition as it was handed down for centuries, or you're in schism with that Tradition. It's that simple.
Posted by Patrick Sheridan at 11:34 pm
Email ThisBlogThis!Share to TwitterShare to FacebookShare to Pinterest