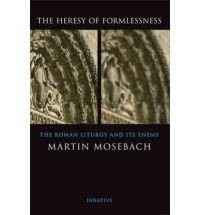 ...though not thinking much about Liturgy at present. I am under pressure at work (not that I'd care to elaborate that here), though have applied for a new position in Administration, which should be fun (yeah!). I am actually reading two things at present; The Lay of Leithian, that great legend by J.R.R Tolkien written in the octo-syllabic couplets of romantic verse; and perhaps more applicable here, The Heresy of Formlessness by Martin Mosebach. I first read the latter six years ago when I was supposed to be revising for my A Level exams. I remember agreeing with everything he said at the time, much of which was insightful and original to me, though I am beginning to wonder. I remember feeling very moved and warm inside when I read his description of an annual low Mass at Monte Tiberio, and the obvious care and devotion demonstrated by the sisters when washing the Altar linen. We all move on though, and I certainly know more about Liturgy and Tradition now than I did when I was an ignorant 17 year old, the year I returned The Shape of the Liturgy by Gregory Dix to St Paul's at Westminster because I discovered, upon reading the Preface, that he was an Anglican. What on earth would an Anglican know about Liturgy? Are they not damnable heretics with no sense of tradition? Unlike we Romans with our marvellous popes, the Rite of 1962 and the Benedictine Altar arrangement, they have the Coverdale Psalter and wear the protestant surplice!

I did buy Dix again, though I have only read bits of it. Was he not held in suspicion by the hierarchy of the Church of England? Reminds me of the plight of Fr Hunwicke, for whom I have been praying unceasingly these past few weeks.
Posted by Patrick Sheridan at 12:00 am
Email ThisBlogThis!Share to TwitterShare to FacebookShare to Pinterest