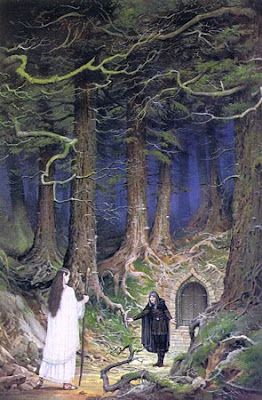 ...son of Eöl of the dark woods. He became enmeshed in the Doom of Mandos and died badly. I am reading The Silmarillion again (the publication of which was a mistake in my view), and have been going over this chapter in my mind. See what you think:

''Thus all seemed well with the fortunes of Maeglin, who had risen to be mighty among the princes of the Noldor, and greatest save one in the most renowned of their realms. Yet he did not reveal his heart; and though not all things went as he would he endured it in silence, hiding his mind so that few could read it, unless it were Idril Celebrindal. For from his first days in Gondolin he had borne a grief, ever worsening, that robbed him of all joy: he loved the beauty of Idril and desired her, without hope. The Eldar wedded not with kin so near, nor ever before had any desired to do so. And knowing his thought of her she loved him the less. For it seemed to her a thing strange and crooked in him, as indeed the Eldar ever since have deemed it: an evil fruit of the Kinslaying, whereby the shadow of the curse of Mandos fell upon the last hope of the Noldor. But as the years passed still Maeglin watched Idril, and waited, and his love turned to darkness in his heart. And he sought the more to have his will in other matters, shirking no toil or burden, if he might thereby have power.

''Thus it was in Gondolin; and amid all the bliss of that realm, while its glory lasted, a dark seed of evil was sown.'' (J.R.R Tolkien, The Silmarillion, Chapter XVI, Of Maeglin).