Good and Bad parish, and Ecumenism...

On we go with that series on Good versus Bad parish.


My mother and I went to lunch at Chislehurst this afternoon. We had planned on going to Sevenoaks, but that is neither here nor there. Anyway, we parked outside the local Anglican church, a very fine church I daresay. I made a point of taking this photo on my iPhone: 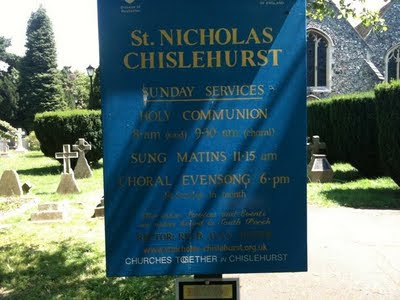 Now just around the corner of this church is another church; a church of the Italian Mission. Far be it from me to single people out but this is supposed to be another one of those so-called ''traditionalist'' parishes. No sung office there, of course, just Mass, Mass, Mass, Mass, Mass, Mass, Mass, Mass, Mass, Mass, Mass, Mass, Mass, Mass and more and more Mass, ad nauseum. This is what genuinely sickens me about the Roman church (leaving doctrinal questions aside for a moment): the complete and utter liturgical void. Romans are arguably the most aliturgical people in the history of civilization. Most big events organised by the Latin Mass Society, for example, will have a high Mass, and possibly some other devotions (such as Benediction, a rosary procession or something), and these people will be pleased with it! They'll go on about how spiritually uplifting it was. Their pilgrimages must be diabolical! Are you telling me that in a parish church with a choir you can't procure any sung Office at all on Sunday? If the Anglicans less than half a mile down the road can manage it, why can't you? It's the Lord's Day for Heaven's sake, at least make some effort! If you can't see the problem with a liturgical diet of just Mass all the time then you're an idiot.


On the way home I was thinking about ecumenism, the SSPX and the fact that Rorate Caeli never published my most recent comment. You see the average traditionalist (unlike we schismatics who can think for ourselves) is stuck in a relentless vicious cycle, constantly ruminating over contradictions because they can't face the fact that their church is riddled with falsehood. Traddies love the SSPX though, and seem to think that the reunion of those lunatics would quicken their cause with august and orthodox Liturgy and the Ultramontane doctrine that goes hand-in-hand with an endless series of low Masses. They despise Anglicans though, and many are so ignorant of Liturgy and history that they condemn the Prayerbook of the Church of England as some kind of compendium of all liturgical heresies whereas see nothing wrong with the liturgical books of 1962 or a fragmented Psalter! Wouldn't the Roman church benefit more from sung Mattins and choral Evensong than yet more low Masses though? The SSPX perpetuate the errors of the pre-Conciliar church and are simply schismatic Ultramontane types, just as unimaginative and stupid as the average pious lady counting her beads in the pew (no offence to the Old Irish Peasant Lady!) - in fact a lot of their clergy are so clearly homosexual that they might as well stop celebrating Mass altogether, don a mantilla and a black frock and join those pious ladies in the pew. But the point is - the most competent liturgical practitioners in the Church of England, in my experience, have little or no interest at all in reunion with Rome. I am not going to presume to tell the reasons for that. Look, however, to the Ordinariate. Most who swam the Tiber in the wrong direction have as little interest in traditional Liturgy as the average Modernist. Then of course there is that hideous cancer, eating away at the foundations of that once illustrious Roman Church - the liturgical books of 1962...hmmmm, methinks that the Roman church has simply had it, and it is time for those to depart who would breathe an air of Tradition undiluted by Ultramontanism.


Here endeth the Lesson.
Posted by Patrick Sheridan at 8:24 pm
Email ThisBlogThis!Share to TwitterShare to FacebookShare to Pinterest