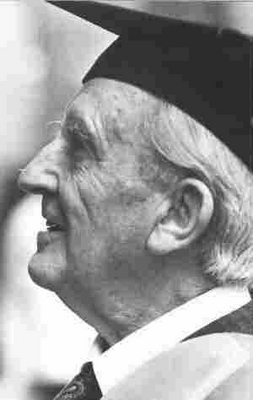 On this day, the 28th March in the Year of our Lord 1972, J.R.R Tolkien, by now a highly decorated and accomplished octogenarian, received his CBE medal from our Sovereign Lady Queen Elizabeth II at Buckingham Palace for services to English Literature, an occasion, he wrote letter, which he found both memorable and delightful. As arranged by Rayner Unwin, a car collected Tolkien, Fr John and Priscilla (Edith had died the year before) from Brown's Hotel at 9.45am and drove them to Buckingham Palace where, he wrote later, ''inside...the ceremonies were, especially for recipients, accompanied by some tedium (with a few touches of the comic). But I was very deeply moved by my brief meeting with the Queen, & our few words together. Quite unlike anything that I had expected.'' (The Letters of J.R.R Tolkien, no.334).

Blessed John Tolkien, pray for us.
O Lord, save the Queen.
Posted by Patrick Sheridan at 8:00 am
Email ThisBlogThis!Share to TwitterShare to FacebookShare to Pinterest