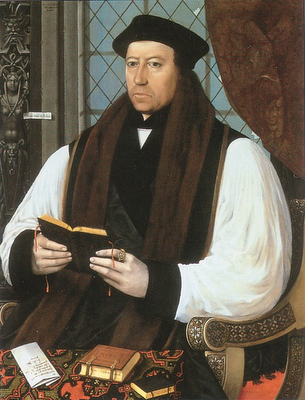 Today is the anniversary of the martyrdom of Thomas Cranmer, one of the Oxford Martyrs, who was burned at the stake for treason and heresy under our late Sovereign Queen Mary I. Cranmer was a masterful man and an eminent scholar, whose enduring legacy is the Prayer Book of the Church of England, although it is unclear how much of the same was his own composition. It is established that he was influenced in the structure of Mattins and Evensong by the Quiñones breviary (which was, thank God, abolished in 1568), the Holy Communion by the Sarum Missal, Luther's Deutsche Messe and Litany, etc. In all fairness, we can't really say much for Cranmer's moral character, having married secretly whilst in Orders, all those recantations made out of fear, not to mention his unfair treatment of the reformer John Frith in 1533, etc, but it would be a great disservice to the great man to say, as so many Romish biographers have, that he was an opportunist and a sycophant, without principle or conviction. His heroic stand at the University Church of St Mary the Virgin on 18th March was commendable, where he said: ''And as for the pope, I refuse him, as Christ's enemy, and Antichrist with all his false doctrine!'' Pure Patrimony! Therewith he was dragged from the pulpit and imprisoned, to be put to death a few days later. He died, his right hand, with which he had written his recantations, outstretched to receive the flames. 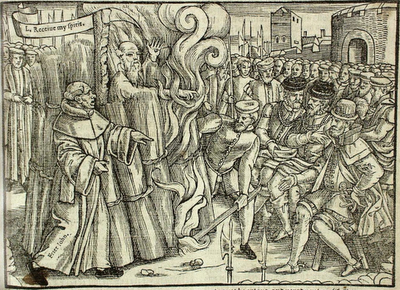 Cranmer did much to extend and unify the English language in the realm, a feat comparable to the influence of Dante on Mediaeval Italian. The 1549 Prayer Book Rebellion was due in part to the fact that Cranmerian English was little understood in the West Country, and a translation of the Prayer Book into Cornish was never made (this can actually be cited in favour of the liturgical use of Latin, at least as a unifying principle). At any rate, the subsequent Demands of the Western Rebels shews how much the minds of men were still under the yoke of superstition. An example of Cranmer's masterful, beauteous English can be taken from the Eucharistic Prayer of the 1549 Prayer Book:

And, here we do give unto thee most high praise and hearty thanks, for the wonderful grace and virtue declared in all thy Saints from the beginning of the world: And chiefly in the glorious and most Blessed Virgin Mary, Mother of thy Son, Jesus Christ, Our Lord and God, and in the holy Patriarchs, Prophets, Apostles and Martyrs, whose examples and steadfastness in thy faith, and keeping thy holy commandments, grant us to follow.

Does anyone know if Cranmer has a place in the Ordinariate kalendar of saints days?! To have created and influenced so great a part of the Anglican Patrimony for four hundred years, I would have thought he would merit something - a proper Collect, Epistle and Gospel, at least?
Posted by Patrick Sheridan at 8:00 am
Email ThisBlogThis!Share to TwitterShare to FacebookShare to Pinterest